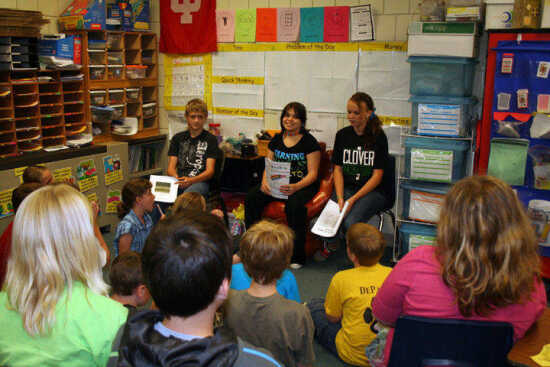 CLOVERDALE -- For the final project of her mythology unit, Cloverdale Middle School teacher Jonna Rady doesn't just have her students read the stories -- she has them write the stories.

All 85 of Rady's seventh-grade language arts students must write an origin myth in the style of a children's story. An origin myth, as you might suspect, is an explanation of how something came to be.

Origins some of Rady's students chose to explain included horses, arts, freezing rain, hunger, mountains and how the world spins.

Once the projects were completed, Rady graded them, but also sent them to the fourth-grade classes of Cloverdale Elementary School. The fourth-graders helped judge the stories in the categories of best overall book, best illustrations and funniest.

The 11 seventh-graders judged as winners visited the fourth graders on Tuesday to read their stories. Asked how they felt about getting the chance to read their work to the younger kids, the students gave a variety of responses.

"I felt a little nervous because I didn't know they actually liked it," classmate Brenan Hall added.

As for why they chose their origins, there were also some different reasons. Kimmy Winders wrote about the origin of hunger for a simple reason.

"I was hungry when I wrote it. It was fourth hour, so I was starving," Winders said.

Naomi Williams wrote about the origin of storms and worked Greek gods Zeus and Hades into her explanation. She said the two gods were fighting over their father's love and it created the first storm.

"If someone was to shout, it would bring thunder," Williams said. "Rain would be the tears of their father."

For Keenan Nees the origin of the Earth's spin was a greedy king named Seymour.

"He really wanted some blueberry pie, but he need wind to cool it down," Nees said. "The gods got together to spin the world so he could eat his blueberry pie."