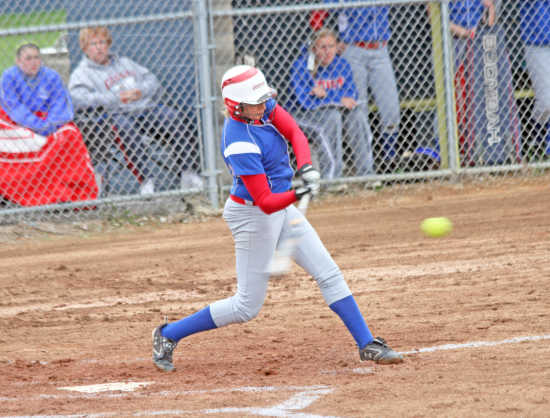 "We capitalized early on some errors that they made and were able to score some runs," South Putnam head coach Chris Jones said. "That fourth inning, we had one big inning and I tell you what, it's always a different girl all the time. Brooke hit a couple nice doubles and then Jenna hit a bomb in left center. It's good to see a lot of our girls being productive at different times and that's nice to see.

"We also did a nice job of running the bases and supporting Brooke defensively and she pitched another great game for us," he added.

Although the 2011 sectional has been a herky jerky start and stop due to bad weather, South Putnam didn't look to have missed a beat. After a scoreless first inning, the Eagles settled in and rattled off nine hits in three innings, including four in the fourth accounting for six runs.

Janet Crafton earned a walk to begin the fourth inning and was brought in when Emily Dabkowski laid down a bunt, which Speedway proceeded to throw around the field. Dabkowski reached third and was joined on base by Jenny Thompson and Kelsey Whitaker.

With the bases loaded, Dabkowski scored on wild pitch and Boetjer hit her second of two doubles on the night to drive in Thompson and Whitaker. The Eagles were up 8-0, but on the next pitch the game was put out of reach.

Jones followed Boejter to the plate and turned on the first pitch she saw from Lorian Tharpe, sending a power shot over the center field fence to give South Putnam a 10-0 advantage. When Jones connected on her homer, even the Speedway fans gave a gasp as the ball exploded off her bat.

"Speedway's a really good team with a really good pitcher and it was nice to put 10 runs up on them. That's not necessarily easy to do. But we came with the right focus and the right effort and now we're where we want to be with a chance to win a sectional championship," Jones said.

The tournament, which began Monday, has had its share of postponements. When asked how his team has kept playing so well during the delay, Jones said it all comes down to focus.

"The girls have been good about focusing when it's time to focus," Jones said. "It was nice for us to get finals out of the way and then once finals were over, they had time to focus on the way here and they took care of business. They did a nice job yesterday, we had to be inside for practice and they did a nice job of getting done the things we need to work on that we could for an indoor practice to get ready for Speedway."

Jones said whichever team wins, the Eagles will have a tough opponent across the field from them.

"We're just going to get ready again and the thing is we don't know who we're going to play, but we know it's going to be a quality opponent because we know Cascade and Cloverdale are two very, very good teams. So we know we have our hands full when we get there and we're excited about having that opportunity to fight for another sectional championship," Jones said.

IHSAA Class 2A Sectional No. 46