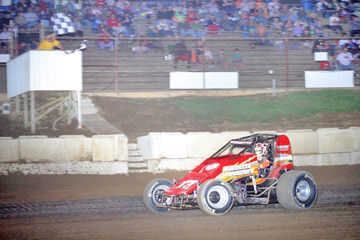 PUTNAMVILLE -- Lincoln Park Speedway once again avoided the majority of the damp weather that several Indiana racetracks fell victim to on Saturday night and that gave several drivers the opportunity to visit victory lane for the first time at the Putnamville oval.

Milan sprint car driver, Brett Burdette led the final two laps of the feature, getting past Dave Darland and Kyle Cummins to take home the winner's share of the prize money in the Burdette Builders, Murray's Body Shop, Watson Gravel No. 17. Burdette is heating up as he finished fourth during the May 21 feature at LPS a night after scoring the A-main victory at Gas City I-69 Speedway.

In the UMP Modified feature, Wheatland native Nick Allen took a night off from Kankakee Speedway where he leads the season points, to visit LPS, and showed off the power on the way to a feature win. Allen survived a re-start with two laps remaining to hold off Clint DeMoss on the way to the checkered flag.

Allen is currently 15th nationally in UMP season points through May 15 in the Smith Motors, Hoffman Construction, Valley Collision modified.

In the bomber division, Corey Gregory has been agonizingly close to the winner's circle, most recently finishing third, twice in the two features on May 21. On Saturday night, Gregory got to celebrate his first A-main win as he held off a furious challenge from Josh Foxworthy and David Bumgardner to earn the victory in the McLaughlin Motorsports, M&R Racing Engines, Griffin Auto Salvage, Mikey's Tobacco Shop, Indy Kart No. 6G sponsored by Daddy Derek.

The UMP Super Stock feature went to Chris Hillman, who outlasted threatening showers and a multitude of cautions to top Steve Peeden and Roy Bruce Jr.

Forty sprints and a total of 110 cars were on hand to compete for the checkered flag on Saturday night, and a brief shower before hotlaps subsided and gave way to sunny skies for much of a beautiful evening of racing at Lincoln Park Speedway.

Darland got the jump on the field early on and was able to open up a five-car lead a couple of times during the early stages of the race as an early red flag for Dakota Jackson halted the feature after he clipped an infield tire.

On the re-start, Darland took off again as Cummins and Jon Sciscoe raced side-by-side for second. Burdette started back in 10th position, but had quickly climbed to fourth after an early caution. Sciscoe and Cummins tussled for the second spot while Darland appeared to have the field covered during the first half of the feature.

Burdette joined the battle for second as he got past Cummins, who had clipped the cushion just ahead of Seth Parker. Cummins and Burdette were wheel-to-wheel behind Darland with five laps remaining.

Cummins went to the top of the track and reeled in Darland as Burdette closed on the bottom underneath Darland. That line worked perfectly for Burdette, who got enough of a run off the bottom to edge past Darland as Cummins held the lead by a nose. Cummins' top line bit him on the final laps as he smacked the cushion, nearly spun, but recovered, but Burdette had shot past into the lead.

Burdette wasn't going to be caught at that point as Darland gave it one final lap shot. He couldn't overcome Burdette, who picked up the victory. Cummins remained in third ahead of Sciscoe, Parker, Babcock, Danny Holtslcaw, Casey Shuman, Keith Bloom and Kent Christian.

From the opening green, it was Allen that was the man to beat as he quickly opened a lead as Craig Conyer had his hands full from Paul Bumgardner early as Sterrett held third while being chased by Josh Landers and DeMoss.

Allen looked as if he would pull away to a convincing win as his lead grew while DeMoss and Bumgardner caught up and split Conyer on either side to make a late pass. However, a caution flag flew with just two laps remaining to bring Allen back to the field for a last re-start.

No one was going to catch him however as a good start put enough space in between him and the second-place car of DeMoss. Bumgardner, Conyer and Brad Barrow wrapped the top-five.

Chris Hillman has had his share of tough luck this season in the UMP Super Stock class, but on Saturday, everything came together as he led wire-to-wire to claim a feature victory.

Hillman jumped out early on the field in his Citizen's Bank, Tire and Wheel Center No. 11 car, but had some company out front from Steve Peeden followed by Roy Bruce Jr. and Slick Griffin.

Cautions plagued most of the main event and an occasional sprinkle of rain threatened to claim the rest of the night's cars. However, the weather held off and Hillman was able to open a small gap over Peeden during the second half of the race to pick up the victory. Bruce Jr. was third ahead of Griffin and Cullen Goodman in the top-five.

No one was happier by the end of the evening than Gregory and his family and crew as he left everything out on the track in order to hold off a stout challenge from Foxworthy and Bumgardner.

Gregory got out front early, but Foxworthy showed him his nose several times over the later stages of the race. Gregory worked his way through lapped traffic over the final several laps and stayed out front to pick up his first feature win. Foxworthy, Bumgardner, Lloyd Walls and B-main winner, Scott Tidwell.

Next weekend will be a regular slate of sprints, modifieds, super stocks and bombers with Thursday, June 9 featuring the USAC Midgets along with sprints and modifieds.