Cloverdale has trouble with Cadets, fall in sectional semifinal contest 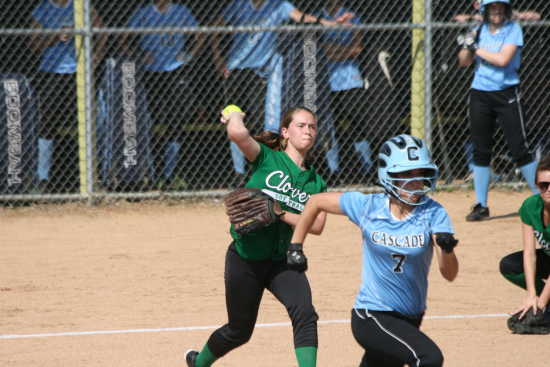 LIZTON -- Coming into a game down three runs usually doesn't happen, but that's the position the Cloverdale Clovers found themselves at the Tri-West softball sectional. The team's game with Cascade was postponed last week for weather in the third inning, so the two picked up where they left off to begin the day Monday.

Despite a gallant effort, Cloverdale came up shy, falling to Cascade 6-4 to end its season. The Clovers began the game down three runs with a runner on third, but held the Cadets scoreless, which according to head coach Kim Bailey said was big for a good start.

"They didn't score anything, so that gave our girls a little morale," Bailey said. "Most people didn't think we were going to come into this game on top -- they didn't think it was going to be a game. We lost our catcher last week in the two innings that we did play. We had a girl playing who had not caught in three years, so she did a heck of a job."

The Cloverdale offense was unable to get things going for the first few innings, but after the Cadets tacked on another run in the top of the fifth, Cloverdale's bats came alive.

Kat Raisor got things going with a single to right field and Samantha Smith reached on a single off the mitt of the second baseman that reached the outfield.

On the second pitch she saw, the junior drove a hard shot to the gap in right-centerfield for a two RBI triple to tie the game at four-all. The Clovers were riding high, but the combination of Cascade and the heat would prove to be too much for them.

"We've done that all season. If we're not hitting, there's always one inning where we have somebody step up and just start reacting. One girl does something; they're going to do the same. But we needed two inning and not one," she said with a smile.

Following a scoreless sixth, all Cloverdale had to do was hold the Cadets scoreless and they would at worse force extra innings and put themselves in position to win. However, things didn't go as planned.

After starting strong, starting pitcher Gutierrez began to feel the effects on the weather. At one point Bailey called timeout to take her pitcher a drink of water and give her a chance to cool down. But the Cadets took advantage and scored two runs in the top of the final inning to hold a two-run advantage entering the final half inning in regulation.

The magic the Clovers captured in the fifth eluded them in the final inning as they went three up and three down to end the game. The Clovers end their season at 14-11.

"I'm really proud of my girls," Bailey said. "They did an excellent job this year. Second in conference, I'm not sure that's ever been done at Cloverdale. I'm very proud of them and we're going to miss the three seniors we had this year."