Check out more photos of the champs at www.bannergraphic.com/gallery/statechamps. 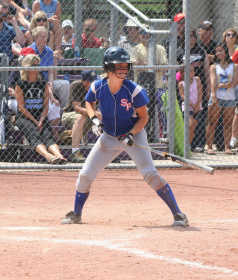 INDIANAPOLIS -- An athlete only gets so many chances at redemption. South Putnam's Jenny Thompson didn't let hers slip away in Saturday's Class 2A softball state championship game.

The junior catcher, 0-for-3 entering her ninth-inning atbat, sent a laser to the left field fence for a three-run double that scored teammates MaKenzie Trisler, Janet Crafton and Emily Dabkowski.

Brooke Boetjer drove Thompson in for the 5-1 final score, as the second-ranked Eagles (28-1) captured their first state title over No. 1 Woodlan (27-3).

"I wanted to be in that position. I was there before in the seventh inning and I didn't get that hit. I just wanted to redeem myself and I got it," Thompson said.

This is only the second team state championship a Putnam County school has captured. The Lady Eagles join South Putnam's 1986 state football champs in that category.

Coach Chris Jones was ecstatic after his team accepted its medals and oversized State of Indiana trophy, using one word over and over to describe the day and the season.

"It's phenomenal," he said. "I'm just so proud of these girls. To work so hard to get to this point and to be under adversity -- Woodlan scoring in the sixth and us just coming out and holding them down. What a great ball team they are, we were just a little bit better today."

The game was scoreless through three innings, with the Eagles leaving the bases loaded in the third.

Jenna Jones then led off the fourth with a home run, taking Warrior pitcher Hannah Robbins over the fence on the first pitch.

"For Jenna Jones to start us off with that homer -- what a monster shot," Chris Jones said.

But the ball didn't look -- or feel -- like a home run off the bat. The sophomore's line drive got just high enough for the north wind to carry it into the stands.

"Honestly, when I made contact, I thought it was a single into left field," Jenna Jones said. "I was booking it (thinking), 'OK, maybe I can stretch this into a double.' I just heard everybody cheering and I looked up and it was gone. I was just on top of the world."

With Boetjer pitching a strong game and the defense playing well around her, it appeared the 1-0 lead would hold, but Woodlan manufactured the tying run in the bottom of the sixth. 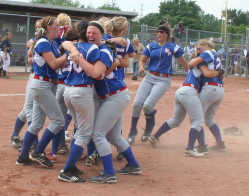 The reality of a state championship setting in, members of the South Putnam softball team flood the infield looking for teammates to hug

Warrior freshman Burgundy Price started the rally off with a one-out single up the middle. After advancing to second on a sacrifice bunt, she tied the game on a single down the first base line by Robbins.

With the heat on, though, Boetjer and her teammates buckled down. The junior hurler did not allow another base runner for the remaining 3-1/3 innings, collecting four of her six strikeouts during that stretch.

The final innings also saw some nice defense from Megan Barnes, Dabkowski and a heart-stopping near drop from right fielder Trisler.

"I felt like my pitching was pretty good, and I felt like our defense definitely had my back," Boetjer said.

"Defensively we were really solid behind Brooke," Chris Jones said. "She pitched a great game. I know she didn't have a ton of strikeouts, but she pitched to our defense, and she did a good job."

The poise in a pressure situation was exactly what the players and coaches have come to expect.

"It was 1-1 once they scored. I knew we had to hold them that next inning. It was pretty much a 0-0 game after that, and I knew if we put it into extra innings, our girls would come through eventually," Jenna Jones said. "I had all the confidence in the world with every single one of my teammates." 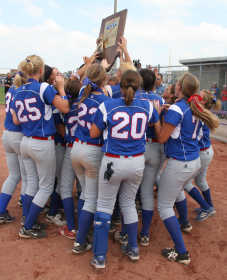 The South Putnam softball team proudly raises its state championship trophy following a 5-1, nine-inning victory over Woodlan in the Class 2A title game.

As for having to pitch two extra innings, Boetjer said she wasn't too worried about her arm.

"I was still pretty strong -- I think I could've gone a couple more innings, but after that I think I would've gotten pretty tired," she said.

A couple more innings weren't necessary, though. After getting two outs in the eighth, Robbins began to show signs of losing her control. While she escaped damage that inning, the ninth was Woodlan's undoing.

Trisler started the rally with a one-out single to right field. Crafton then tried to lay down a sacrifice bunt, but ended up with an infield hit when the third baseman fell before fielding the ball.

"Jenny Thompson -- she was due," Chris Jones said. "It was a great hit to left field, got three runners in."

Thompson's big hit was poetic justice for the coach, who knows the vital role his catcher played in managing a pitching staff that allowed just 16 runs all season. Saturday was a chance for a normally unsung hero to get a bit more attention.

"One person who needs to get a lot of credit who hasn't gotten much this season is Jenny Thompson for calling a great game," Chris Jones said. "She's called great games all year behind the plate. She did another phenomenal job today."

The credit can really be shared, though, with 15 players and three coaches able to say they finished the season the way everyone hoped -- as champions.

Check out more photos of the champs at www.bannergraphic.com/gallery/statechamps.

For video of the game, go to www.ihsaatv.org.