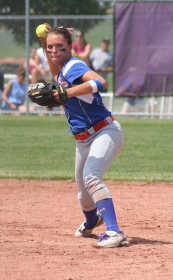 After fielding an eighth-inning grounder, Emily Dabkowski turns to throw the runner down at first base. The shortstop will be a key piece of a team that graduates just one player from a state championship squad.

INDIANAPOLIS -- The celebration of South Putnam's state softball title had barely begun when one of the Eagles' male athletes shouted a question through the Ben Davis fence to Coach Chris Jones.

"Hey Jones, are you satisfied now?" came the facetious query.

The coach, his ever-present grin just a bit wider in the aftermath of a state championship, gave the perfect answer.

It's a clichť among coaches to say things like "next season begins tomorrow" at the end of the year. However, for this Eagles team, graduating just one senior from a 28-1 state championship squad, the expectations for 2012 can't help but be high already.

After all, the team returns pitcher Brooke Boetjer, with her 21-1 record, 0.45 ERA and 184 strikeouts. She's also verbally committed to play for Arizona State after next season, a program that won an NCAA title last week.

There's Emily Dabkowski, who batted .511 from the leadoff spot and provided stellar defense at shortstop.

"The expectations have been high for us, but I think they just reached a whole other level because when you are a state champion, you do have that target on you for the next season. With most of our girls returning, that's the way it's going to be," Jones said.

The expectations from outside cannot possibly match those coming from the Eagle dugout. On the other hand, Jones knows that even having the chance to play in the finals is a big deal.

"I like our odds, but it's going to take a lot of work," he said. "We have a very tough conference, a very tough county, and it's not easy to get here. I think they understand that. Hopefully we'll be able to focus and get to that point."

For the one Eagle departing for college, second baseman Megan Barnes, the standard of excellence remains high for her former teammates.

"I have no doubt they'll continue to be great because the talent they have on that team is amazing," Barnes said. "The bond they have pulls each other through, even in tough times. They're still going to be great. They'll go far, and I'll be back to support them in every way I can."

Perhaps this team's sunny attitude is the best thing it has going for it in a title defense. Jones is a positive, unflappable presence, and his players reflect that outlook. They don't so much dwell on wins and losses as they do the chance to play together and have fun.

"I should have a goal of another state championship, but I'm just glad I get to play with these girls again. I'm really excited, can't wait for it to start again," third baseman Jenna Jones said.

By the coach's admission, he'll take a week -- perhaps even two or three -- to enjoy this one. He just hopes his players realize what a special thing they've accomplished.

"I'm going to give it about a week ... or maybe June -- I might be satisfied through June," Jones said.

"But they need to enjoy this because we're not promised another time back here. To be able to get one and get it done is just amazing."