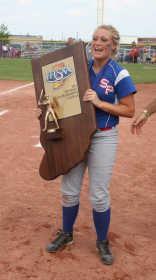 Overwhelmed at the weight of the IHSAA championship trophy, South Putnam's only senior Megan Barnes calls for some help from her teammates in carrying their prize.

INDIANAPOLIS -- The IHSAA Class 2A softball tournament began with 100 teams. If the average team has a roster of 16, and we figure one out of four of those players is a senior, that makes 400 players making their last go-round in the tournament, give or take.

Of those approximately 400 players bidding adieu to their high school careers, just one -- South Putnam's Megan Barnes -- finished her career with a win. The team captain achieved a dream for every high school athlete when her team poured on four runs in the ninth inning to defeat Woodlan 5-1 on Saturday.

The recent graduate got emotional after the game when speaking of her teammates, choosing to share credit for the title with her 14 teammates.

"It feels amazing, but I will have to say, obviously I have the best teammates I could ever ask for," Barnes said. "As a senior going out this way, the only thing you can ask for is good teammates to help pull each other through. I love them all."

Coach Chris Jones singled out his senior. Barnes had a scrappy final game in an Eagle uniform, reaching base twice on a hit by pitch and a walk and playing a big part in the Eagles' airtight defense up the middle.

"Megan Barnes was phenomenal all season long -- her leadership, the way she picked girls up, the way she got some timely hits. Defensively, she was great in the state tournament, did a great job making plays for us at second base," Jones said.

The coach, about a decade Barnes' senior, also gave some insight a few years out of school can provide.

"I know she's going to relish this for the rest of her life. What a way to end a career," Jones said. "She maximized the entire season. We practiced as many times as anyone in the state can practice, and we played the maximum number of games. To get a state championship, for her to end her career like that, is just great."

Barnes will attend Ball State in the fall, with plans to major in language and speech pathology.

"I'm not playing softball in college, but I am staying involved -- I'll be in different clubs and intramural activities, and I'll definitely be coming back to support the girls next season," Barnes said.

Jones is confident good things are in store for Barnes off the field as well.

"I'm just so happy to call myself her coach. She's going to be great in whatever she does because she just has that type of attitude and that work ethic," Jones said. "You can't say enough about Megan, and she is going to be sorely missed."