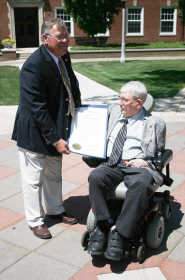 Indiana Governor Mitch Daniels has awarded retired doctor Roy K. Hunteman, M.D., with the Distinguished Hoosier Award, which is given to Indiana residents who have excelled in their fields

The award was presented recently by District 44 State Rep. Jim Baird, a fellow Vietnam War veteran, in front of at the Roy West Library of DePauw University.

Dr. Hunteman, who now resides in Richmond, is a 1963 graduate of DePauw, where he was a member of Phi Beta Kappa. He was also a Rector Scholar at DePauw.

His wife, Mary Kaye (Wright) Hunteman, is a Greencastle native. His brother and sister-in-law, Gary and Shari Hunteman reside in the Fillmore area.

Hunteman graduated from the Indiana University School of Medicine in 1967 at which time he was named to Alpha Omega Alpha and was also the recipient of the Dr. Mary Jean Yoder Award.

From 1968-1969, Hunteman served a tour of duty in Vietnam as a U.S. Army captain in the Medical Corps. In 1969 he received the Vietnam Service Award, the Bronze Star with Oak Leaf cluster and the Army Commendation Medal with V Device.

From 1970-1971, Dr. Hunteman did an internal medicine residency at the Indiana School of Medicine. He completed a 1971-1972 family practice residency at St. Vincent Hospital, where he was the first resident to graduate from the program and pass the National Family Practice Boards.

Dr. Hunteman then went on to serve a home mission assignment for the United Methodist Church to the Sea Island Comprehensive Health Care Corp. in the island clinics from 1972-1977.

From 1977 through December 1994, Dr. Hunteman practiced family medicine in Richmond. He was one of the co-founders of Friends of the Battered for Women and Children, which was the precursor of the Genesis Shelter for Women. He also assisted Emily Cooper in establishing the WIC program in Richmond.

From 1985-1991, Dr. Hunteman was the 6th District director for the Indiana Academy of Medicine, and in 1992 he was president of the Wayne-Union County Medical Society.

In December 1994, Dr. Hunteman suffered a devastating stroke that left him paralyzed on his left side.

After completing five different sessions of physical and speech therapy, he became a volunteer at the Central Boys and Girls Club from 1999-2003. He received the Distinguished Public Service Award in 2000 from the Indiana Academy of Family Medicine.

Dr. Hunteman taught anatomy and physiology at Ivy Tech Community College from 2003-2004. He received a meritorious certificate from the Library of Congress and U.S. Sen. Richard C. Lugar for participating in the Veterans History Project.

Dr. Hunteman has served as a member of the Petra Board of Richmond since 2004. He said his most exciting project was helping his fellow board members work to develop the Siloam Free Clinic, which opened in July 2009.