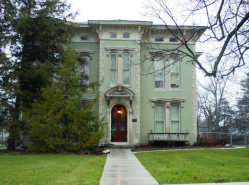 That's apparently the opinion of both national and state historic preservationists, who in 2011 have realized what many Putnam County residents have known for years -- that Greencastle has its share of stately old houses and historic old neighborhoods.

Two of those historic city areas -- the Eastern Enlargement and Old Greencastle -- have been added to the National Register of Historic Places through action this week by the National Park Service/U.S. Department of the Interior.

"We should all be very proud of the Heritage Preservation Society. Congratulations to all," she said, thanking HPS president Phil Gick for his leadership.

Meanwhile, a third Greencastle residential area, the Northwood Addition, was nominated for inclusion in the National Registry but its status is currently on hold.

In April, the three areas were designated historic districts by the Indiana State Preservation Board. Added to the Indiana Registry of Historic Places, all three locations were recommended to the National Park Service for its consideration for inclusion in the National Registry.

Greencastle's Eastern Enlargement, as the name would suggest, is the area to the east and south of the downtown. Encompassing the most historic homes within the friendly confines of Greencastle, it is roughly bounded by East Franklin Street on the north, Wood Street on the east, Anderson Street on the south and College Avenue on the west.

Of 295 possible structures within the Eastern Enlargement, 270 were identified as contributing to the historic designation of the area.

In Old Greencastle, 79 out of 97 structures were considered of historic significance. That number is skewed by the U-shaped nature of the area that excludes the site of the more-modern Moose Lodge properties.

While the Northwood Addition application is in need of tweaking, according to Gick, neither he nor the Indiana Division of Historic Preservation and Archaeology sees a problem with Northwood ultimately being accepted to the National Registry.

"It will probably be another month and a half before we can anticipate a successful response on Northwood," said Gick, himself the owner of the historic Sunny Hill home at 911 E. Washington St.

Northwood Addition, an area platted in the 1920s, had 110 qualifying structures out of 112 possible contributing structures.

A ceremony designed to recognize new Indiana additions to the National Registry is scheduled for 1 p.m. Thursday, Aug. 11 at the Indiana State Fair (in the DNR Building Amphitheater).

The Heritage Preservation Society of Putnam County will be coordinating with residents and supporters who live within the newly designated districts, seeking individuals to officially representative those districts at the ceremony.

Additional attendees will be highly encouraged, Gick said, but they will have to pay their own admission to the State Fair.

Gick said community support was important in both the state and national historic designations being realized, pointing to "a burst of activity from Greencastle."

Among the advantages of the historic district designations, Gick said, include possible tax benefits for residences and other economic pluses, along with providing some protections against actions by other departments.

However, the designations do not, as he stressed, limit a property owner's options for modifying and/or selling his home.