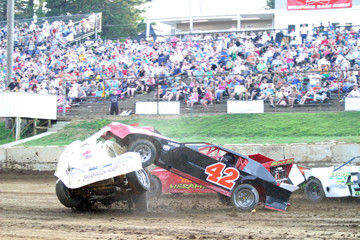 Paul Wright (No. 42) crashes hard into the car of Kris Starks during heat UMP Super Stock heat race action. Both drivers were uninjured in the crash.

PUTNAMVILLE -- Over the holiday weekend, the nation celebrated Independence Day and fans at Lincoln Park Speedway were treated to fireworks in the sky by Circle City Pyrotechnics and on the track by some of the top hotshoes in the country.

In the Super Stock division, no one has been able to catch up to Doug McCullough lately as he scooted away to win his fourth consecutive feature, this one by nearly a straightaway over Cullen Goodman. In the final and perhaps best finish of the night, David Bumgardner scraped past Jordan Almanza off the final corner to win the bomber feature.

Two-time LPS feature winner, Brett Burdette, and Jon Stanbrough made up the front row for the sprint car main event as Memmer and Gulick lined up behind them. Burdette led from the opening green and built a several car length lead during the early going.

However, Memmer and Seth Parker fought for second ahead of a developing battle between Gulick, who was running the high side, and Stanbrough.

A caution eight laps in reset the field and gave Gulick a shot at the lead as he worked the sizable cushion at the top. Gulick and Burdette were even up, drag racing to the line lap-after-lap before a caution flew as Parker spun off turn four.

On the re-start, Burdette held the lead briefly as Shane Cottle joined the fight in the Jeff Walker-owned No. 11 machine trailed by Memmer and Stanbrough.

Behind the lead group, Darland was using his considerable experience to work his way forward from the 14th starting position. Cottle scooted past Gulick into second off the corner and quickly nabbed the lead off turn two. The pass set up a wild battle for the top spot as all three competitors went at it for a handful of laps, swapping the advantage before Cottle banged hard off the cushion and appeared to break a steering arm that slowed him some.

Up front, Darland and Stanbrough battled with Gulick for the lead over the final few laps before Darland was able to gain a small separation and score his third feature win for Daryl Tate's race team at Lincoln Park Speedway this season. Gulick maintained the runner-up spot ahead of Memmer, who caught Stanbrough as Burdette held fifth at the checkered flag.

In the UMP Modified division, Hayden has been the man to beat at Lincoln Park Speedway this season. He was able to add the sixth feature win of the year to the Fillmore native's resume.

Thirty-six modifieds were on hand seeking the winner's share of the purse as Devin Gilpin, Clint DeMoss, Jacoby Hines and Hayden were heat race winners and Kenny Carmichael Sr. picked up the B-main victory.

When the feature went green, Roger Mills and Randy Milburn were up front battling side-by-side ahead of Hayden and DeMoss followed by Gilpin.

Several early cautions plagued the main event, but once it was sorted out, a five-way battle up front developed as Hayden chased Millburn over the latter half of the feature. DeMoss joined the fight over the final circuits looking to add to his weekend haul after claiming a victory at Bloomington on Friday.

Millburn, Hayden and DeMoss went three-wide over the final five laps with the outcome fully in doubt until the final two corners and Hayden made a daring pass off turn four, blasting past Millburn off turn four to claim the win. DeMoss crossed in third-place as Richie Lex took fourth and Craig Conyer placed fifth.

In the UMP Super Stock division, McCullough continues his march up the UMP State points race as Saturday's win gave him another 75 points and should catapult him close to the top-15 from his current spot in 24th.

McCullough broke free of a duel with Cullen Goodman over the opening laps and then fought past Mike Staggs to claim a lead he never relinquished, pulling away over the second half of the feature to win easily. Goodman held off Staggs for the runner-up spot ahead of Kenny Carmichael Sr. and Phil VanSant in the top-five.

The bomber feature took to the track to cap the evening and didn't disappoint.

Corey Gregory led the feature early on with designs in winning his second career feature, but he was collected by a lapped car during an attempted turn four pass and made contact with an infield tire. Lloyd Walls then gained the lead as Bob Farris and Josh Presley followed by Almanza.

Walls' quest for the win was also derailed as he slipped off the track and fell back to midpack as Presley and Almanza were left to fight for the lead. Almanza jumped out to the lead off turn one as Presley was holding off Bumgardner. The pair were door-to-door for several laps leading to the checkered flag as Bumgardner made the pass for the lead off turn four and the two banged their way to the finish line. Bumgardner earned the win by a couple of feet over Almanza, Presley, Farris and Scott Tidwell.

Next week at LPS will be a regular card of sprints, modifieds, super stocks and bombers along with the second bicycle race for kids.