N.Y. flags at half-staff Friday for Pfc. Waters; funeral services to be in Whiteland 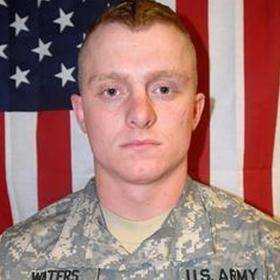 NEW YORK -- The state of New York will pay tribute this Friday to a Putnam County soldier who died in combat in Afghanistan last Friday.

Pfc. James A. Waters, 21-year-old son of Garry and Valerie Waters, Cloverdale, was fatally wounded when his unit was attacked by an insurgents detonating an improvised explosive device in Kandahar province.

Acknowledging the supreme sacrifice made by the Fort Drum, N.Y.-based infantryman, New York Gov. Andrew Cuomo has directed that flags on all state government buildings be flown at half-staff on Friday, July 8 in Pfc. Waters' honor.

"I join with the family, friends, and fellow soldiers of Private 1st Class Waters in mourning his passing," Gov. Cuomo said Tuesday.

"Private 1st Class Waters made the ultimate sacrifice in service to our country," the governor added. "We will honor his memory and continue to hold the brave men and women based at Fort Drum in the highest regard for their dedication to keeping America safe and protecting freedom around the world."

Waters was assigned to the 1st Battalion of the 32nd Infantry Regiment, 3rd Brigade Combat Team of the 10th Mountain Division based at Fort Drum.

Meanwhile, funeral services for Pfc. Waters remain unsettled. As of presstime Tuesday night, his body had yet to be released by Dover (Del.) Air Base officials for its return to Indiana.

The Banner Graphic has confirmed that services will be conducted in Whiteland (Johnson County), where Pfc. Waters graduated from Whiteland High School in 2008. His family moved to the Cloverdale area soon thereafter.

Jessen said the service will conducted at Whiteland High School. He said the funeral home staff had met with the Waters family on Tuesday and was to meet with school officials on Wednesday to work out arrangements.

Timing depends upon when the body is released by Dover and flown to Indianapolis, Jessen added.

"We're hoping for Saturday," Jessen said in regard to funeral services, "but again, that all depends on Dover. We're hoping to have official word tomorrow (Wednesday).

"Unfortunately both brothers (Anthony and Andy) will be going active (duty with the U.S. Army) next week," he added. "One leaves on the 12th and the other on the 15th."

Pfc. Waters joined the Army in September 2009. After basic training at Fort Benning, Ga., he was sent to Fort Drum in January 2010.

In March 2011, he was deployed to Afghanistan with his unit in support of Operation Enduring Freedom.