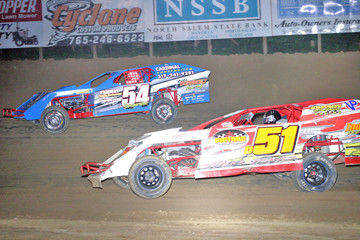 Paul Bumgardner (54) and Rob Fuqua battled during the UMP modified feature Saturday at Lincoln Park Speedway. Bumgardner would go on to win the event, with Fuqua finishing third.

PUTNAMVILLE -- With dirt car drivers embroiled in battles around multiple tracks around the state, Lincoln Park Speedway played host to an intense fan base and a large car count chasing the lion's share of winners' money.

In the sprint car feature, second row starter Lance Grimes collected an infield tire on the opening lap and was relegated to the pits, leaving Brett Burdette, Brent Beauchamp, Shuman and Jonathan Bradshaw to take the opening green.

Burdette and Beauchamp put on a side-by-side show for the opening laps before the two collected each other along with Bradshaw in the early stages of the main.

When the feature went green again, Shuman was the man to beat. He rocketed from the re-start and Shane Hollingsworth was in chase throughout the feature. Shuman gathered a solid lead and built upon it over the course of the feature. As lapped traffic played a factor over the final laps, Shuman held his spot with Hollingsworth claiming second. Seth Parker came home in third place followed by Ethan Barrow and Travis Welpott.

In the UMP Modified feature, Bumgardner hasn't had much luck this season with a bevy of mechanical problems derailing his chances at gaining a feature victory. On Saturday however, the defending series points champion held off repeated challenges from both Wes McClara and Rob Fuqua to score the victory in his Durabuilt Racing, Cardinal Contracting, Specialty Grafix No. 54 also sponsored by Fairway Family Restaurant and The Dairy Castle.

Bumgardner had his hands full from the opening green as Fuqua was side-by-side, three-wheeling the bottom line alongside of Bumgardner with McClara hot on their bumper. The trio was three-wide by the midpoint of the feature before a late caution flew as a car clipped an infield tire.

On the re-start, Bumgardner got a good jump off turn four and turned away a challenge from McClara and then led the final few laps to victory as Fuqua claimed third ahead of Kenny Carmichael Sr. and Craig Conyer.

The UMP Super Stock feature had some extra incentive for the winner as $200 was added to the prize for the driver that took the checkered flag. The money was added in memory of Larry Rowly, a long-time part of the racing community and a car owner for a number of drivers in the past.

Carmichael started in the back of the field after mechanical problems in his heat race and he put on a show while reeling in the front runners.

Slick Griffin led much of the feature as he held off dogged attempts from the hard charging Doug McCullough, owner of four straight feature wins in the class, and Steve Peeden a multiple feature winner at LPS last season.

Griffin held fast to the lead until the second half when McCullough was able to find an opening on the bottom and slipped through into the front spot. However, Carmichael was already among the leaders as he battled for fourth with Cullen Goodman. Several laps later, Carmichael made his move for the lead, taking over as he found some room as the leaders worked through lapped traffic.

McCullough wasn't going away however as the two were side-by-side over the final laps before coming off the final corner dead even. The finish proved to be a drag race as Carmichael carried enough momentum off the top to nose out McCullough's attempt for five in a row.

Peeden scored third place ahead of Griffin and Goodman in the top-five.

In the bomber feature, Shoulders started up front and wouldn't relinquish the point until the checkered flags waved. However, Shoulders was challenged early by Corey Gregory, who later suffered some mechanical problems that sidelined him. Shoulders then had to fend off challenges from a determined Lloyd Walls along with Scott Tidwell and David Bumgardner, who have all won a feature at LPS this season.

Shoulders proved up to the task despite having to work through lapped traffic late and he survived a re-start that gave Walls a last chance.

However, Shoulders came home with his first win of the season with Walls, Tidwell, Bumgardner and Ben Williams in the top-five.

Next week will feature the seventh Bomber Bash with $500 going to the winner of the feature. Also on tap will be the sprints, modifieds and super stocks.