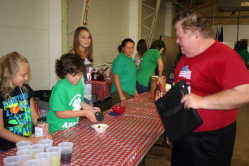 Addison Hughes, second from left, asks Darrell Wiatt of the Putnam County Fair Board if he would like sprinkles on his ice cream sundae during the fair kick-off celebration Sunday afternoon. Hughes congratulated Wiatt on his "excellent choice."

Legionburgers and cattle judging at the Putnam County Fair do not occupy the fairgrounds for a couple more weeks. But that doesn't mean the week-long festival can't be kicked off a little early.

That was what the Fairgrounds Endowment Committee had in mind when it held an ice cream party Sunday afternoon at the Putnam County Fairgrounds community building. The event featured the Jolly Juniors 4-H Club, a brief history lesson and lots of sprinkles and chocolate syrup. Ken Torr was the master of ceremonies and he talked about the history of the fair and some of the unique highlights -- some embarrassing moments among them -- that have taken place at the fair over the years.

"It brings the farm and city families together," Torr said.

During the 174 years since the first Putnam County Fair, the location has moved several times from the town square, to Robe-Ann Park, the DePauw University Campus and Bainbridge before settling on the Fairgrounds. While the location has changed several times, and the fair was not held consistently until the 1940s, the Fairgrounds Endowment fund is meant to keep the fair going every year for the next 174 years, said Elaine Peck, executive director of the Community Foundation.

"I hope each and every one of you will help participate," Peck said.

The Foundation's goal is to reach $100,000 by the end of the fair. With the Fairgrounds receiving a 4.5 percent payout each year, the total would give them a $4,500 payout. The Foundation will be accepting donations at the fair and donations can also be mailed and made payable to the Putnam County Community Foundation with "Putnam County Fairgrounds" in the memo to 2 S. Jackson St., Greencastle, IN 46135.

Many former Fair presidents were in attendance, including current Dist. 44 State Rep. Jim Baird and Leon Tippin, and the 2010 Fair Queen Stephanie Berry.

More pre-fair activities will take place on Saturday, July 16 with a 4-H tractor operator contest at 8 a.m. at the fairgrounds outside driving track and a 4-H fire arms round robin contest at the Cloverdale Conservation Club. The Fair Queen will also be crowned at the fairgrounds' exhibition hall at 7 p.m.