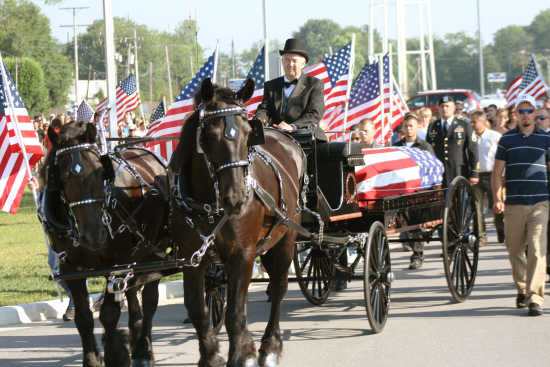 WHITELAND -- Garry Waters of Cloverdale did two things he, or any other parent, would never imagine doing Saturday.

He said goodbye to his 21-year-old son James Allen Waters -- a U.S. Army infantryman who was killed in action July 1 when his unit was attacked in Afghanistan by insurgents detonating an improvised explosive device.

And he reluctantly talked about it with the media.

His parents, Valerie and Garry Waters of Cloverdale, are accompanied by Sgt. Jeff Jackson, military aide to the family, as they enter the high school just behind the casket.

Funeral services were conducted Saturday at Whiteland Central High School in the small Johnson County community south of Greenwood. Ceremonies began at 9 a.m. with a horse-drawn caisson, driven by Dave Thurston, taking the body of Spec. E-4 Waters from Jessen Funeral Home on U.S. 31 to the high school about a half-mile away.

More than 100 mourners carried American flags and walked alongside and behind the casket, the procession moving in virtual silence except for the rhythmic clop-clop-clop of horses' hooves as the caisson went rolling along. Past the Whiteland water tower. Past his old elementary school. South to the gymnasium entrance to the high school.

It was only the beginning of a long emotional day that concluded more than six hours later as the 750 people in the bleachers and floor seats filed past the casket to say one last goodbye. That came after a 21-gun salute performed outside the gym doors, followed by Brig. Gen. Courtney Carr presenting the ceremonially folded flag that covered Spec. E-4 Waters' casket to his mother, Valerie.

With all that in mind, it was no surprise Garry Waters looked obviously exhausted and reasonably detached as he waited to address the media briefly in the school hallway.

While others have described his son as a hero and an inspiration to all who played sports alongside him or served along with him in the military, his father called him "a jokester who liked to have fun."

But in the next breath, he was quick to add that "Jimmy always took up for the little guy."

It was during his sophomore year at Whiteland High School, about two years before the family moved to Cloverdale, that Jimmy became interested in an Army career.

"There were a lot of Army people around," Garry Waters recalled, "and he admired what they did for our country and all."

Waters joined the Army in September 2009. After basic training at Fort Benning, Ga., he was sent to Fort Drum in January 2010. He was assigned to the 1st Battalion of the 32nd Infantry Regiment, 3rd Brigade Combat Team of the 10th Mountain Division, based at Fort Drum. N.Y. Last March, he was deployed to Afghanistan.

When he and his unit encountered the fateful IED that reportedly produced at least one other casualty, Waters was a private first class.

During Saturday's funeral service, the family received notification from U.S. Secretary of the Army John M. McHugh that Jimmy Waters' "patriotism, loyalty, valor and abilities" earned him the posthumous promotion to Specialist E-4.

It was also announced that he was awarded the Bronze Star Medal for meritorious service during Operation Enduring Freedom and the Purple Heart as a result of the wounds he received in action July 1 in Kandahar Province, Afghanistan.

Army Sgt. Jeff Jackson, who was assigned to accompany the family wherever and whenever they went the past week, said the official report of the incident is not yet complete.

"The family will be briefed later and can share that information if they so desire," he said.

"They let out a few things about it," Garry Waters admitted. "They're still doing the investigation. I can't say anything until they tell me to."

During the funeral service, Garry Waters' remarks were read by family friend Steve Swails, himself choking back emotion as he spoke.

"We thank God for the 21 years we had Jimmy," he read. "Jimmy's journey wasn't always easy. It took every one of us (coaches, family, friends and clergymen) to make him the man he became."

Able to inject a little levity into his remarks, Garry Waters said his son "got his orneriness from Valerie."

In keeping with Jimmy Waters' wishes, there was no burial. He is being cremated.