Admission is $3 per person.

The rest of the 2011 fair queen candidates were featured in the July 8 and 9 editions of the Banner Graphic. 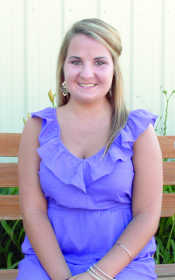 Cierra Perry, 18, is the daughter of John and Celeste Perry of rural Greencastle. She has one sister, Clair, 16.

Cierra is a 2011 graduate of South Putnam, having participated in golf, National Honor Society, student council, Fellowship of Christian Athletes, cheerleading, softball and Spanish club. She has also participated in 4-H and Putnam County Teen Court.

She will enroll in Purdue University this fall. Her future plans include graduating from Purdue, meeting the man of her dreams, getting married, having kids and living happily ever after.

Before heading off to Purdue, Cierra hopes to make some memories with the queen contest.

"I've always wanted to be in the queen contest and since it's my 10th year, I decided this would be a memorable end to my 4-H experience," she said.

Cierra's hobbies include golf, swimming, being outside, crafting, reading, listening to music and playing the piano.

"I am responsible, fun loving young woman who loves to be with friends and family," she said.

Her best advice for a younger person is to "try your hardest every day and don't be afraid to be yourself."

Cierra most admires her parents John and Celeste Perry.

"They have taught me to work hard for what I want and are always there for me," she said. "I also admire Linda Merkel because she is always willing to help others and has taught me a lot about myself while getting me more involved in my community."

Cierra said an internship with Putnam County Juvenile Probation has had a great impact on her life.

"My internship with Putnam County Juvenile Probation really opened my eyes to what was happening in my community and influenced my career path. It made me more responsible and taught me a lot about the legal system." 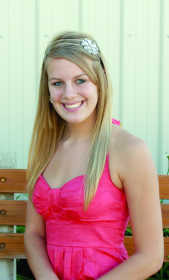 Megan, 18, is the daughter of Roland and Melissa Robinson of Roachdale. She has one sister, 16-year-old Morgan.

Megan plans to play volleyball at Hanover. Her career plans include becoming a math professor.

"I feel that I am self-motivated, forgiving and compassionate," Megan said.

She said she entered the contest to meet new people, gain interview experience and to try and be a good role model.

"I also think it will be a blast," Megan said.

Her advice to a younger person is "take advantage of every opportunity presented to you and don't lose yourself along the way."

Megan said her four years of high school have had a big impact on her life.

"Entering high school has made me the person I am today because from that moment on I told myself to never stop studying, resist peer pressure and be the person I always looked up to," she said.

Megan most admires her father, who has influenced her with his work ethic.

"He is the most hard-working and honest person I have ever met. I want to be like him when I grow up." 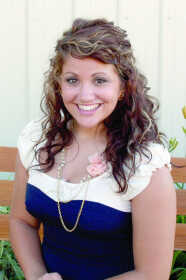 Cara, 18, is the daughter of Rusty and Lisa Stanley of Fillmore. She has three siblings -- Brandon Stanley, 30, Jessica Tharp, 29, and Nic Stanley, 17.

She will attend Ball State University in the fall and study telecommunications. Upon graduation, she hopes to become a television news anchor.

Cara recalls her childhood fondly when explaining why she entered the contest.

"Like most little girls, I dreamed of being a princess. Now I dream of making a difference for those little girls," Cara said. "Plus fair week would be 10 times more fun."

Cara encourages those young people to seize opportunities and smile.

"Embrace every opportunity thrown at you," she said. "People don't live forever and for that reason a person must live life with a big fat gorgeous smile on his or her face."

She describes herself as outgoing, positive, driven, dedicated, kind, bubbly and "I love to laugh."

Her hobbies include music (singing, dancing and listening), writing and reading, taking pictures, shopping and spending time outside.

Volunteering at the Area 8 Special Games had a big impact on her outlook.

"A young Russian boy named Vaja has changed me forever," she said. "His story of how he was adopted truly touched me. Vaja is my inspiration every day because he had such a positive way of looking at the world. His severe autism has never stood in his way of success."

She also expressed her great admiration for her parents.

"My parents are the best people I know. My father works hard to support his family and would do anything to keep us safe. My mother is kind and caring -- she is always there for her children."

Paxton, 19, is the daughter of Aaron and Mandy Stephenson of Fillmore. She has one brother, Ethan, 20.

Paxton recently graduated from North Putnam, where she participated in cross country, track, volleyball, basketball, TSLA, SWAT, SADD, National Honor Society and student council. She has also been a 4-H member and the president of the Working Farmers 4-H Club.

She plans to attend Milligan College and participate in cross country and track.

"My future plans include going to Milligan College to major in exercise science, then continuing to the University of Indianapolis to receive my doctorate in physical therapy," Paxton said.

"I decided to enter this contest because I love everything about the Putnam County Fair and I would love the opportunity to represent my county and our fair," Paxton said.

Her hobbies include running, being outdoors, and working at her barn. She also enjoys playing cards with her family and going to as many concerts as possible.

"I am a hard working and self-motivated person," Paxton said. "I stand for what I believe is right and I try to find the positives in every situation."

Paxton would tell a younger person to "always work hard, always be yourself and don't let people influence what you know is right."

She most admires her dad, who she describes as the hardest worker she knows.

"He always seems to have a smile on his face and looks for the positive things in life," Paxton said. "He is a great dad and a great role model."

The event that changed Paxton's life was starting to run cross country in 10th grade.

"If I hadn't started running I don't know where I would be today. Running has influenced my college choice, my lifestyle choices and my friends. I have met so many great people and have made lifelong friends. Running has made me a more relaxed and stronger person."