'Cheaper By the Dozen' to open Playhouse run Thursday night 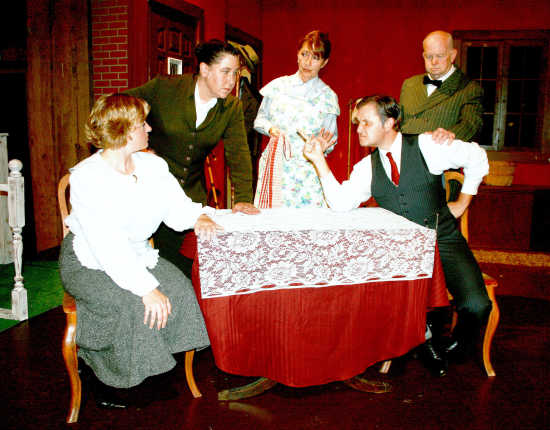 Teacher Mrs. Brill (Kim Brattain, standing left) clashes with Frank Gilbreth (T.J. Tincher, seated right) over the study habits of his children in a scene from the Putnam County Playhouse production of "Cheaper By the Dozen." Lori Baker (seated, left) plays wife Lillian Gilbreth with Mary Ann Birt as the family maid and Clarence Long as Dr. Burton. The comedy opens Thursday at the Hazel Day Longden Theatre on Round Barn Road in Greencastle. Additional shows are set for July 15-16 and 20-23.

The 50th season of Putnam County Playhouse continues this week with a production of the comedy "Cheaper By the Dozen," presented beginning Thursday at the Hazel Day Longden Theatre in Greencastle.

The comedy is scheduled Thursday through Saturday, July 14-16 and again July 20-23. All performances begin at 8 p.m.

Tickets are $10 each and can be reserved by calling the PCPH box office at 653-5880 after 5 p.m. Monday through Saturday.

Directed by Lita Sandy, the play is based on the popular book by Frank Gilbreth and Ernestine Gilbreth Carey.

The book was made into a popular 1950 movie, and the title was used again for a film in 2003. The play more closely follows the earlier film.

"Cheaper By the Dozen," sponsored in part by Hammer & Co. CPA, tells the story of time and motion study/efficiency experts Frank and Lillian Gilbreth and their 12 children.

The setting is the 1920s, and the complications of raising such a large family result in hilarious consequences for the Gilbreth clan.

The story is told in flashback by the two oldest children. Complications include the girls wanting to begin dating, a teacher who can't believe the study habits of the family, and the family dog.

The title comes from a favorite Gilbreth gag: If the family was out driving and stopped at a red light, a pedestrian might often ask, "How come you have so many kids?" Gilbreth would pretend to ponder the question, but just as the light turned green, would respond, "Well, they come cheaper by the dozen, you know," and drive off.