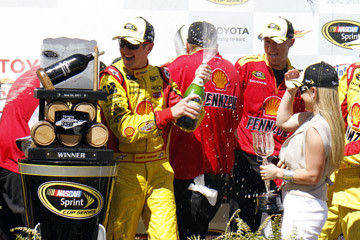 Jonathan Hassler (far right) celebrates after Kurt Busch's win in the Toyota Save Mart 350 at Infineon Raceway. Hassler was recently promoted as the race engineer for the No. 22 Penske Racing machine in the Sprint Cup series.

Life is all about seizing opportunities. Greencastle native Jonathan Hassler learned that first hand recently when he got the call to join the No. 22 Kurt Busch Sprint Cup team at Pocono.

Already the race engineer for the No. 22 Brad Keselowski Nationwide car, Hassler knew the Busch team was experiencing some turmoil. So when he got the call to join the team for the weekend, he knew the possibility existed that he would be asked to stay with the team.

The team was coming off a disappointing ninth place finish at Kansas and Hassler said if for no other reason, he agreed to go to Pocono to work with the No. 22 team to help decide if he would be interested in the full-time position.

Busch raced his way to a second place finish at Pocono and Hassler got the offer to join the team the following Tuesday. Since the Pocono race, the team has an average finish inside the top 10 and has moved from sixth to third place in the Sprint Cup standings.

"My goal from the day that I decided that I wasn't going to be competing in racing as a driver has always been to become a successful Sprint Cup series crew chief, and getting into the Sprint Cup series as a race engineer would be taking a big step toward that goal," Hassler said.

In recent power polls on ESPN, Busch is ranked as the third best driver and Hassler attributes that to the racer's hugely competitive nature.

"I think our team's biggest strength is teamwork, both within the No. 22 Shell/Pennzoil team and the Penske Racing organization," Hassler said. "Within our team, every individual has his responsibilities, but at the end of the day we realize that we are all working toward the common goal of building the best racecar that we can possibly build."

Hassler holds himself to a personal high standard as well. He said DePauw grad and current Butler Men's Basketball Coach Brad Stevens has been an inspiration as well as a book written by former USC head football coach Pete Carroll.

He said Stevens' success at such a young age has been impressive, but it's the way the head coach has achieved it is what caught his attention.

"Stevens seems to have that cool, calm, always thinking, always working hard way about him that I hope to exhibit in my own career," Hassler said.

"There were two messages in the "Win Forever" book that stuck with me," he said. "The first was that winning forever was having a 'relentless pursuit to find a competitive edge.' If you are always looking for ways to improve, you'll continue to find yourself in the position to win. The second message was to develop a personal philosophy and live according to it every day.

"My philosophy, without much explanation, is to have great energy, great effort and great execution," Hassler added.

Now Hassler hops onto perhaps the biggest stage of his young career. He and the rest of the No. 22 Shell/Pennzoil team come to the Indianapolis Motor Speedway for the Brickyard 400, a race that holds personal significance for Hassler.

He said he remembers going to the track in 1993-94 with his family for qualifications and said how cool it would feel to deliver car owner Roger Penske his first Sprint Cup win after he's experienced such success in open wheel racing. He said the legendary car owner reminded his team in Hew Hampshire that Indianapolis was his favorite track.

"Words can't describe how cool it would be to kiss the bricks," Hassler confessed. "For me personally it would mean a lot, being from Indiana and having such an appreciation for the Speedway and all of the prestige that goes with it."

Even so, when asked what track makes him the most nervous, he said in his position as race engineer, he doesn't really have time to get nervous. He said it reminds him of his playing days for the South Putnam football team, where you were so focused on the task at hand you didn't have time to think about the external factors of the situation.

Busch sits in third place behind Carl Edwards in first place and five-time Sprint Cup champion Jimmie Johnson in second place. Hassler believes if the team continues on its present course, things should work out well for them.

"I think the rest of the season can continue to go well if keep doing what we are doing -- working hard, working smart and continuing to improve. I am excited at the opportunity to compete for a Sprint Cup series championship," he said.

There are seven races left before the Chase for the Cup begins and with Hassler, Busch and the No. 22 Shell/Pennzoil sitting in third place, they all have their eyes on the horizon in their quest for the 2011 Spring Cup Championship.

The Brickyard 400 begins at 1 p.m. Sunday at the Indianapolis Motor Speedway..