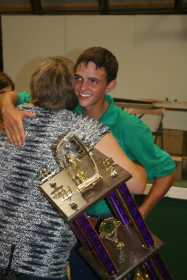 Tightly gripping the biggest trophy at the Putnam County 4-H Fair, Logan Pell accepts a hug from a friend following Thursday's Supreme Showmanship competition. Pell became the second horse and pony representative to win the award in 60 years of competition.
Order this photo

The Putnam County 4-H Fair Supreme Showmanship competition has always been something of an away game for the 4-H Horse and Pony participants.

More at home in the fairgrounds outdoor arena, the horse barn representatives have to travel a few hundred yards west to the indoor arena, home to the other five species in the competition.

It's little wonder, then, that in the first 59 years of the county's Supreme Showmanship competition, just one horse and pony representative has hoisted the fair's most coveted prize -- Lisa Sutherlin in 1980. 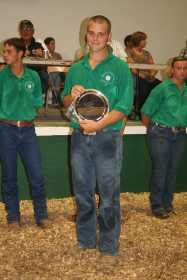 After four generations of his family showing at the Putnam County Fair, Jared Fordice outdid all Fordices who came before when he finished second in Thursday's Supreme Showmanship competition.
Order this photo

Logan Pell doubled that list on Thursday night, winning the 60th installment of the contest over Jared Fordice of the beef barn.

"I'm in shock. It's something I've been working all year for, been dreaming of it since I was a little kid," said Pell, a 16-year-old South Putnam junior.

Pell was nothing but smiles as he accepted the largest trophy at the fair from Tommy and Ryan Hendricks, son and grandson of the late Tom Hendricks, a Putnam County sheep showman whose family has sponsored the award since 1973.

He is the son of Wayne Pell and Jennifer Eller and the brother of Hallie Pell.

Also representing their individual barns were Josie Parent from the sheep barn, Shea Mahoney-Sutherland of the goat barn, Katie Arnold of the swine barn, and Jacob Kirkham of the dairy barn.

"I'd like to congratulate all my competitors," Pell said. "Only one of us can win it, but I thought they did a great job."

Although he was representing the horse and pony program, Pell also participates in the swine and sheep programs. He said the biggest adjustment was to the beef and dairy cattle.

"I showed dairy when I was very, very young in a few open shows, but I had very little experience at all," Pell said.

For runner-up Fordice, the pride in finishing so high came in doing something no one else in his family had done at the fair. In four generations of Fordices showing at the Putnam County Fair, none had finished as high as Jared did Thursday.

"I'm pretty excited to not only support myself, but to support my family," Jared said. "I'm the last Fordice to come through here, and I've done better than they've all done. I'm the first Fordice to ever get a piece of this."

For Pell, the night was about a different kind of family pride -- the kind of family most 4-H'ers find when they've spent the better part of a decade around one particular project.

"I show swine and sheep also, but I really wanted to win it for the horse barn. I was really proud to do that for them."