DPU president tells incoming students to have 'no small thoughts, no small dreams' 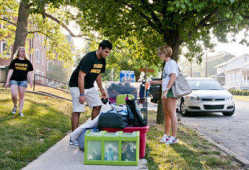 Students move into the dorms on Saturday as DePauw University welcomes its class of 2015.

Saturday marked the beginning of a new year at DePauw University with the arrival of members of the Class of 2015 in Greencastle.

"On this first day, I hereby, and officially, give you permission -- right now -- to work with this faculty and this college to make this world as big as you can," DePauw University President Brian W. Casey told the 612 new students who arrived on campus Saturday.

"The slate is clean. The day is young. Open your eyes, you never know what you will see. Open your ears because music is about to play. Open your mind because at this moment, at this very moment, all is possible. "

Casey addressed the incoming class and their families at DPU's traditional opening convocation in Kresge Auditorium of the Green Center for the Performing Arts.

Led by bagpipers, the president and the new students processed across campus on their way to the afternoon program, passing through the gate outside East College and marching past the academic quadrangle on their way to the Green Center, where they were welcomed by cheering members of the DePauw faculty.

The students and their families spent the morning and early afternoon moving into their residence halls and enjoying a picnic.

The new students include 589 members of the Class of 2015, as well as 15 transfers from other colleges and another eight foreign exchange students. The new students represent 47 states and 34 foreign countries.

Cindy Babington, vice president for student life and dean of students, said 137 of the new undergraduates were members of National Honor Societies; 123 maintained straight "A" averages for their high school career; 41 were named valedictorian or salutatorian of their high school classes; 39 students were selected class or student council president; and 151 were named captain of a sport in their senior year.

Casey urged the new undergraduates to spend the next four years exploring subjects and spending time getting to know their professors, which happens on a residential liberal arts campus where the average class has 15 students.

He added, "Education is a contact sport. You can wrestle with thoughts, you can be stunned by beauty. Awe is always possible."

The president also recounted the story of DPU's first out-of-town student, Thomas Goodwin. In November 1837, traveling by stagecoach, wagon and on horseback and foot in terrible conditions, it took him more than four days to reach Greencastle from his home in Brookville, Ind.

"Dear members of the Class of 2015. You are Tommy Goodwin. You are the realization of this university's hopes. You are the new echoes of this old school."

In closing, President Casey told the new class -- which will be part of DePauw's 175th anniversary celebration which begins in January 2012 --"Class of 2015: Have no small thoughts here, have no small dreams. Welcome to DePauw -- I can't wait to meet you, to work with you, and see how you are going to change us, and change the world."

After the convocation, the new students met with their faculty advisers and began the orientation process before saying farewell to their families.

Classes for the 2011-12 academic year begin on Wednesday.