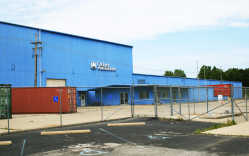 The former Greencastle Manufacturing and Oxford Automotive plant on Manhattan Road has a new owner today. Phoenix Closures, a Naperville, Ill.-based manufacturing company, has purchased the 225,000-square-foot facility and its 57.5 acres of real estate.

With bad economic news still just sinking in about Putnam County's 10.5 percent unemployment rate, there is good news today to counter that.

The old Greencastle Manufacturing building, most recently known as the Oxford Automotive plant, has been purchased by Phoenix Closures, an Illinois-based company.

A manufacturer of plastic packaging, Phoenix Closures today announced plans to create up to 90 new jobs over the next several years at its new Greencastle location.

That announcement comes just three days after local officials learned that Putnam County had the sixth-worst jobless rate in the state for July.

The firm specializes in injection-molded closures for the food and beverage, pharmaceutical, nutraceutical and household chemical industries. It plans to renovate and expand the former Oxford Automotive site at 370 N. Manhattan Rd. on Greencastle's southwest side.

The company plans to use the 225,000 square-foot facility built on 57.5 acres of real estate as a food-grade packaging manufacturing plant.

"Phoenix Closures could have built this new factory in a number of places, but they chose to do so in the top manufacturing state in the country," Indiana Gov. Mitch Daniels praised through a press release.

"Indiana's highly skilled workforce and strong business climate will give Phoenix Closures every opportunity for continued success. Greencastle will be a great home for this new facility."

Phoenix Closures will begin construction on the new facility later this year. The plant is scheduled to begin production in late 2012. It will mark the company's third new site since 2000.

"In addition to meeting our specific manufacturing requirements, the Greencastle site is located near our strategic markets and has potential for growth," Phoenix Closures Vice President of Manufacturing Ed Buck said.

"The availability of a crane bay in the building and rail service makes the building a viable option for redevelopment," Buck added.

The Indiana Economic Development Corporation offered Phoenix Closures up to $800,000 in performance-based tax credits and $200,000 in training grants based on the company's job-creation plans.

The City of Greencastle will be asked consider additional property tax abatement at the request of the Greencastle/Putnam County Development Center, GDC Director Bill Dory said.

"We are pleased to welcome Phoenix Closures to our Greencastle and Putnam County communities," Greencastle Mayor Sue Murray said.

"The community is looking forward to the transformation of a vacant facility into a new, world-class plastics manufacturing operation," she said. "This project is just one example of how the great business climate in Greencastle is helping the community grow and prosper."

The big blue building that began its industrial life as Greencastle Manufacturing in 1971 has also been known as Lobdell-Emery Corp. It last operated as Oxford Automotive when it closed its doors and idled 330 workers six years ago.

A Greencastle City Council resolution passed in July endorsed the site as an economic revitalization area and made the property eligible for industrial recovery tax credits for renovation and reuse of the facility.

Within the first few days of the Oxford site being designated a "dinosaur building" under the above resolution, GDC Director Bill Dory was seen hosting industrial prospects on the vacant property.

In addition to stock and custom closures ranging in size from 22mm to 120mm, the company also offers such services as closure and package design, technical field support and personal customer service. One of the caps the company makes is the plastic Maxwell House Coffee top.

Headquartered in Naperville, Ill., with manufacturing facilities in Naperville, Davenport, Iowa, and Newport, Tenn., and a distribution center in Ontario, Calif., Phoenix services both domestic and foreign customers.