Tuesday hearing is all about Martha Payne

Tuesday afternoon in Bedford, court proceedings are expected to dictate the future of convicted murderer William A. Minnick.

Putnam County Prosecutor Timothy Bookwalter, however, intends to make them about the past.

And more specifically, Bookwalter wants to make those proceedings about the victim -- 24-year-old Martha Rushing Payne, who was killed Oct. 26, 1981 in her 9 S. Locust St., Greencastle, home. 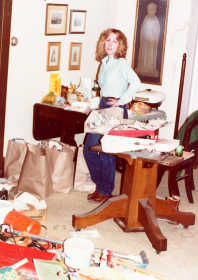 Martha Payne surveys the work in progress during the renovation of the Paynes' 9 S. Locust St. home just a couple of weeks before she was murdered there in October 1981.

"For 30 years this case has basically been about Bill Minnick," Bookwalter said of the now 48-year-old perpetrator who is getting a resentencing hearing.

"We have forgotten about her ... a 24-year-old life that was just taking off," the prosecutor said.

Certainly she really has never been forgotten. But the fact is, back in 1981, family members deflected any and all attention. They did not even provide a photograph of Martha to run with news stories or with her obituary.

"My father deliberately did not give the press a picture," Jim Payne said in an interview last week. "He made the decision for us because I was in a state of shock. He didn't want anyone to know who we were."

That has all changed now, 30 years later.

The court will hear about Martha, the 1976 Terre Haute South graduate, and a young Martha, whose father was killed in a private plane crash in Arkansas. And most of all, the court will learn about Martha Payne, the Greencastle housewife who knew no enemies.

Bookwalter is right, agrees Jim Payne, now 54 years old and reliving his worst nightmare of coming home to find his wife murdered and his life forever turned upside down.

"What was taken from her?" Payne asks, knowing full well the answer. "Everything."

She never had a chance to have children. The Paynes were still a couple years away from that.

She never had a chance to reach anything close to her potential. To be all that she could be. Martha Payne would be 53 now. She'd probably be a grandmother and most certainly would be immersed in helping people.

That latter characteristic ultimately may have been her downfall, Jim Payne believes.

"One of the problems," he said, "was that she trusted people too much. She wasn't cautious enough, and he was a predator, I guess."

Payne said that in researching all the old testimony and transcripts covering two trials and numerous other court appearances in the case, he has come to a new realization: Minnick had been stalking his wife before he killed Martha.

"When you read all that testimony, you know that he was seen in the area and was seen driving past the house two or three times earlier that day," Payne said. "He was waiting for me to leave (for work).

"He was stalking her."

Payne also wants to put to rest any notion Minnick was working for the couple as a handyman.

At the time, Payne had been in California for a month, helping Lone Star (now Buzzi Unicem) bring a new cement plant on line. All the while, he and Martha had been renovating the old house and had begun to realize the project was more than they could handle by themselves. They talked about getting someone to help with it.

While Payne was out west, he learned his wife had talked with a young man about possibly helping with the work. But when he heard the price the teenager was asking for the job, Payne knew Minnick didn't know what he was talking about and was likely unqualified for the work.

He told Martha not to use him. Yet Minnick still came to the Payne home twice that fateful day, authorities say.

Certainly the details of that day will never fade from Jim Payne's memory.

"I came home, and all the doors were open. All the lights were on and the car was gone," Payne recalled for the Banner Graphic, thinking his wife must have needed to get someplace in a hurry. (It turns out the car had nothing to do with the crime. Its battery had died two blocks away and Martha left the car there and walked home).

Jim headed toward the bathroom to take a shower and remembered crumpling up a wrapper in his hand and tossing it toward a trashcan in the corner of the bedroom.

He missed, and when he reached down to pick up that errant projectile, Payne saw a kitchen knife on the floor and picked it up. He recalled thinking he saw blood on it and wondering what in the world Martha was doing cutting up meat in the bedroom.

"I thought, 'Now that's weird,' and when I turned, I could see her head on the other side of the bed," he continued. "Her eyes were black. Later I learned from Del (Prosecutor Brewer) that was due to strangulation."

He knew she was dead, composed himself as best he could, and went to call police.

There was no 911-dispatch center back in 1981, and whoever answered Payne's call initially thought it was a prank. After all, it had been 50 years since Greencastle had witnessed a murder.

"I sat at the kitchen table and waited," Payne remembered. "I was just catatonic.

"I was in a state of shock the whole first week. I couldn't eat for five days. I honestly could not swallow anything ... except for water. But I could smoke cigarettes, I remember that. I don't even smoke now.

"It was like someone holding a gun to your head," he continued. "It's got to be a similar feeling. My level of stress went up at that moment and stayed that way. You think something like that only happens to someone else."

For 10 years or more, Payne admits any time he heard the telephone ring, he immediately expected bad news.

Similarly, Payne said he still finds it difficult just to get out of bed mornings when it's cold and damp -- the way it was that October day -- without feeling like he is going to relive the horror.

Other circumstances also trigger the memory.

He recalled being panic stricken to come and find the doors of his new home open and the lights on and the car gone.

"I couldn't go inside the house," he said. "I was panicked. I couldn't go in there until I saw someone was inside moving around. I told my wife, 'Don't ever do that again!'"

Payne does admit his relationship with Martha's mother, Eleanor Royer, became strained in the aftermath of the murder.

"I think she thought I believed that I had it worse than she did," he said, noting that Martha and her mom were "really, really close."

However, the relationship turned around, Payne said, when he confided in Mrs. Royer that he knew she had lost a daughter and she could never really get over that, but while he had lost a wife, he would probably one day remarry and create a new life. And he has.

Martha's 81-year-old mother will be making the trip from Arkansas to attend the hearing Tuesday, along with the victim's sister Sharon and half-sister Stephanie from Texas.

Prosecutor Bookwalter, of course, plans to put Jim Payne on the stand for what looms as potentially the most dramatic portion of Tuesday's proceedings in Lawrence Circuit Court. It could well make the difference between Minnick going back to prison until he's 98 or getting out after serving 30 years of the 60-year sentence for murder.

"I've testified five times now, so it's not like this is anything new to me," Payne said.

After 30 years, he just wants it to finally be the last time.

Comments
View 23 comments
Note: The nature of the Internet makes it impractical for our staff to review every comment. Please note that those who post comments on this website may do so using a screen name, which may or may not reflect a website user's actual name. Readers should be careful not to assign comments to real people who may have names similar to screen names. Refrain from obscenity in your comments, and to keep discussions civil, don't say anything in a way your grandmother would be ashamed to read.