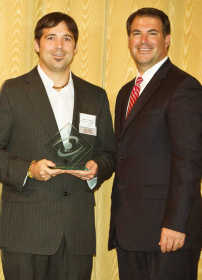 INDIANAPOLIS -- A growing Putnam County business was named a "Company to Watch," while five Indiana firms were recognized Thursday as Spotlight Award recipients at the fourth annual "Companies to Watch" ceremony in Indianapolis.

The Putnam County firm, Scorpion Protective Coatings Inc., was one of 43 Indiana companies from 18 counties honored as 2011 "Companies to Watch" during the program.

CEO Clayton Tomasino and wife Beth represented Scorpion at the ceremony at the historic Indiana Roof Ballroom in downtown Indianapolis.

Companies recognized as "Companies to Watch" are privately held businesses incorporated in Indiana, employ six to 150 full-time employees and have between $750,000 to $100 million in annual revenue or capital.

Tomasino said the "Companies to Watch" designation was based on job growth and revenue growth.

Scorpion has seen its revenue grow by more than 30 percent in the past year, while its employees have increased from nine people to a staff of 14.

"With the projects we have scheduled," Tomasino told the Banner Graphic, "we could easily triple in growth over the next three years."

Scorpion, which became a master distributor for Avery-Dennison Graphics in 2011, has been a 2010 semifinalist and 2009 finalist for Indiana Small Business of the Year.

Since 1996, Scorpion Protective Coatings has become a worldwide leader in the spray-on polyurethane coatings industry. Operating mainly under the trade name of Scorpion Truck Bed Linings, it sells into a variety of industries including the military, automotive, OEM and retail sectors.

Scorpion exports materials to more than 25 countries/territories around the world, according to the Indiana Chamber of Commerce website.

The Spotlight accolade, presented jointly by the Indiana Economic Development Corporation, its Small Business Development Center network, Purdue University and the Edward Lowe Foundation, recognizes past "Companies to Watch" honorees that have demonstrated continued growth, success and commitment to Indiana.

"Spotlight award winners are shining examples of the growth and ongoing impact that 'Companies to Watch' recipients have in their communities and beyond," said Mitch Roob, secretary of commerce and chief executive officer of the Indiana Economic Development Corporation. "These five companies exemplify the many strengths of Hoosier businesses."

Lee and Ryan Environmental Consulting Inc., a 2010 "Companies to Watch" recipient, has grown from 65 to 135 full-time employees, opened a facility in Atlanta and won a $15 million contract for PCB sediment removal in Milwaukee this year. The Service-Disabled Veteran-Owned Small Business had 35 percent revenue growth in 2010 and projects another 60 percent growth this year.

Livin' Lite Recreational Vehicles, a 2009 "Companies to Watch" recipient, weathered the RV industry storm and grew from approximately 51 to 77 employees in 2011. With 200 percent revenue growth in 2010, the RV manufacturer expects an 88 percent revenue increase this year due to its new lightweight RV model.

MainGate Inc., a 2008 "Companies to Watch" recipient, has worked with the Indianapolis Museum of Art, Susan G. Koman for the Cure, Ladies Professional Golf Association, National Collegiate Athletic Association, Churchill Downs and sports teams, including the Colts, Redskins, Vikings, Lions, Titans and Chiefs of the NFL. The event retail and merchandising company has bids going out on the Super Bowl and Big Ten championships.

Micropulse Inc., a 2008 "Companies to Watch" recipient, has grown to 217 full-time employees. The medical products manufacturer, which specializes in surgical instruments, implants and delivery systems for orthopedics, had 26 percent revenue growth in 2010 and projects 13 percent growth in 2011.