20 years since I-70 rock-throwing death

Today -- Saturday, Aug. 27 -- marks 20 years since a tragic incident on Interstate 70 claimed the life of a 28-year-old Arcadia woman whose only mistake was choosing to drive through Putnam County in the wee hours of the morning.

En route to Terre Haute with a male companion to pick up her young children (ages 9 and 10 in 1991), Marsa Gipson was driving westbound, approaching the 33-mile marker at about 1:15 a.m.

As they went under the Manhattan Road overpass, two large chunks of riprap rock (later estimated to weigh 21 or 22 pounds) were thrown down on the front of Gipson's Chevrolet Camaro.

One bounced off the car hood, missing the windshield on the passenger's side and causing her companion to react as if the hood had flipped up. The other jagged rock slammed through the driver's side of the windshield, fatally injuring Gipson, who moments later died at the scene from massive head trauma.

Twenty years of unanswered questions have lingered in the case. Two decades have gone by without any resolution, even after investigators and the victim's family returned to the scene three years ago for a thorough reconstruction of the incident.

But 20 years can't diminish the pain and anguish Marsa Gipson's family has dealt with. Every August is a reminder. Not only does the anniversary of her death occur during the month but her birthday comes around each August as well.

"Hopes and memories are all we have left," Jack Hacker, her father, said after the 2008 reconstruction event.

Putnam County Prosecutor Timothy Bookwalter has been wanting to take the evidence collected over the past 20 years to a Grand Jury. He said that in 2008 and he said it again this week. But he wants to make sure it is enough evidence to convict the perpetrators. 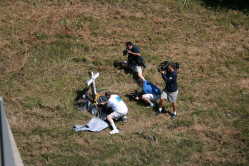 While visiting the site for a 2008 accident reconstruction, Marsa Gipson's father, Jack Hacker, rearranges flowers at the base of a cross that marks the area where his 28-year-old daughter was killed 20 years ago Saturday.

Charlie Bollinger, the investigator for the Prosecutor's Office, said he has interviewed more than 100 people in the case. They range from the proverbial "persons of interest" to interstate travelers that night to those who might have secondhand knowledge of what the usual suspects may have said or done on the bridge or in the aftermath of the incident.

"It's like most investigations," he told the Banner Graphic. "You interview one person and end up with five more to talk to when you're done with the first one."

Time and distance have conspired to lengthen the process. Some of those involved have moved away, some as far as Florida and California. At least one is in prison elsewhere.

"It's been so long," Bollinger said, "that everybody is scattered all over the country."

The veteran investigator said he expects another 10 individuals to be interviewed in the case.

The Prosecutor's Office has issued what are known in the legal profession as Baker's Warrants, Bookwalter and Bollinger revealed. The warrants allow authorities to detain persons of interest and obtain fingerprints and DNA samples to compare to evidence collected previously in the case.

All of that has been sent off to laboratories to be tested.

DNA also has been obtained off the rocks that were collected from the scene of the incident. It stands to be more significant now because "they didn't have the DNA technology then that we have today," Bollinger noted.

"Realistically we're two to three months out," he said. "Once we get the lab case back, we can organize the information and submit it to the prosecutor for review. Then he can decide to charge someone or to submit it to the Grand Jury."

"It's murder or it's nothing," Bookwalter stressed. "We've got to get this right."

And that realization has helped slow the process. No date has been set for impaneling a Grand Jury.

"We have persons of interest," Bookwalter assured, "that's where we're at with it. And the people who are not being cooperative, we're continuing to work on."

There are also multiple I-70 overpass incidents influencing the case, including eight in the period April-August 1991. Six of those involved the same Manhattan Road overpass where the fatality occurred, all in the early morning hours.

One of the lingering issues is that multiple individuals (five or six) were involved in several separate events but the cast of characters seems to change from incident to incident.

Witnesses reported seeing at least two or three people on the overpass that fateful night Marsa Gipson was killed.

The prosecutor agrees those individuals probably should have been charged in the other, non-fatal cases they admitted involvement in before the statute of limitations ran out. But it is too late now.

Bollinger has been working on the case with retired veteran State Police Detective Rick Lang, who was the chief investigator on the Jill Behrman case in Bloomington, along with Jeff Hearon, who is the Putnamville District investigator.

"I hope what the State Police and I have been doing will bring some closure to this case and to the victim's family," Bollinger said.

"Every time I hear of a case where something is thrown off an overpass, I can't help but think of Marsa," he said.

The senseless, random nature of the incident and its dire outcome make everyone who drives the interstate a little uneasy when they go under an overpass.

Like other investigators, Bollinger is at a loss for why someone who throw a heavy rock or anything else down on a car traveling at 60 or 65 mph.

"Any reasonable person would understand that such a thing could easily result in injury or death," he said. "I can't explain why somebody would want to do that."

Cheap thrills, boredom, intoxication ... those have usually been the prevailing notions related to any theory on it. But everyone concerned is long finished with theories. They want to solve Marsa Gipson's death.

"It's an all-or-nothing case," Bookwalter assessed. "We only get one shot at it now."