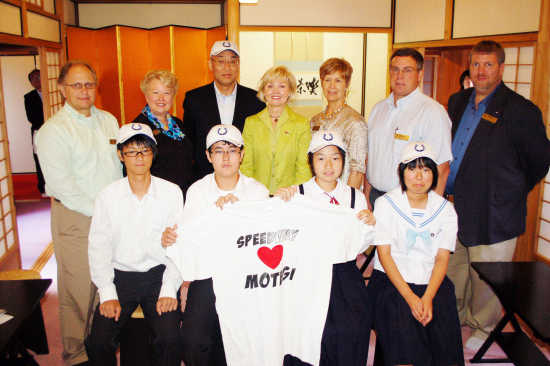 Greencastle Mayor Sue Murray (back, third from right) joins Indiana Lt. Gov. Becky Skillman (back, center), Mayor Tatsuya Koguchi of Motegi, Tochigi, Japan, students from Motegi Junior High School and other members of Indiana's trade delegation for a ceremony Friday in Tochigi Prefecture. The students were presented with Indianapolis Colts hats and T-shirts form Speedway High School, which raised $2,500 for their sister city after the March earthquake. On Saturday, the Hoosier delegation was to visit Fuji Heavy Industry's Subaru factory and meet with Subaru suppliers in Ota City. Mayor Murray and others were to visit Shigeru Industries, the parent company of Heartland Automotive in Greencastle, headquartered in Ota City.

Happy to have both feet firmly on the ground after a harrowing flight from China to Japan, Greencastle Mayor Sue Murray and the Indiana Trade Mission delegation have reached the second leg of their Far East visit.

On Saturday, Mayor Murray, Greencastle/Putnam County Development Center Director Bill Dory and others were scheduled to meet with representatives of Subaru auto parts suppliers in Ota City. That is home to the headquarters of Shigeru Industries, parent company of Heartland Automotive in Greencastle.

The group was also scheduled to visit the Fuji Heavy Industry (Subaru) plant on Saturday.

That marked a calm, peaceful change after the difficult travel just getting to Japan for the second phase of the Trade Mission.

Mayor Murray and Dory were among the group that first visited China as part of an Agriculture and Community Development Mission that started in Hangzhou Sept. 19 and continued to Zhejiang Sept. 20.

However, getting from China to Tokyo proved to be quite an adventure in the face of the typhoon descending upon Japan.

"We have finally made it to Tokyo ... this afternoon," the mayor said Thursday, explaining that they had taken off from Hangzhou on Wednesday afternoon.

"The first two hours of the flight were fine," Mayor Murray reported, "and as we started our descent, we found ourselves on a collision course with the typhoon."

That's when it really got interesting and more than a little nerve-wracking.

"There was one attempt to bring the plane down, probably the worst almost-landing I've ever been on," the mayor continued. "The pilot aborted and we finally landed in Kansai (the province surrounding Osaka)."

Immediately after the plane landed, the airport there was shut down and the Hoosier delegation spent the night in Osaka.

"Today (Thursday) we took the bullet train to Tokyo to find the six of us who had continued on from China were the first of the Indiana delegation to arrive," Murray said.

All official events for Thursday were canceled, including a Friends of Indiana reception in Tokyo.

Lt. Gov. Skillman and the remainder of the trade delegation that was traveling directly to Japan from Indiana (by way of Minneapolis) had their original flight canceled Tuesday because of the typhoon activity in and around Japan.

"We will all try and regroup," Mayor Murray said. "There is some talk about the typhoon turning back south, so I guess we all will continue to watch the weather."

On Sunday, the group is slated to visit the Midwest US-Japan Association (MWJA) Conference welcome reception before attending portions of the conference on Monday. Lt. Gov. Skillman will travel to Sony Monday to visit with company executives.

On Tuesday, Skillman will deliver a keynote address at the MWJA closing ceremony. In the afternoon, the Hoosier delegation is scheduled to attend an agriculture association meeting and confer with executives from several Japanese commodity groups.

The visiting Indiana group will also meet with executives from several Japanese companies, including Mitsubishi (Indiana Packers), Itochu and Subaru on Tuesday.

Wednesday's agenda calls for the delegation to meet with executives from Toyota, Aisin Seiki, and the Nagoya Chamber of Commerce and Industry. They will also host a Friends of Indiana reception in Nagoya.