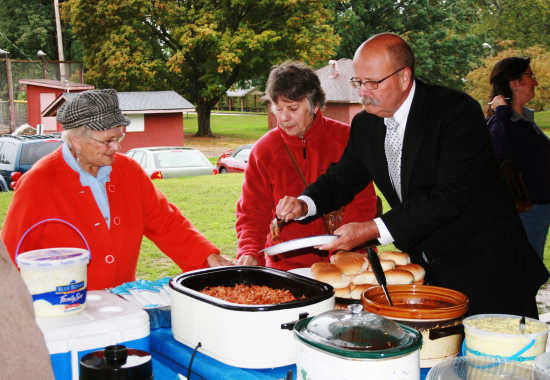 Democrat candidate for governor John Gregg is first in line at the Putnam County Democrats' picnic Sunday evening at Robe-Ann Park in Greencastle. Helping serve Gregg a barbecue sandwich and other picnic fare is the cook herself, Carolyne Sharp (left) as Sally Gray waits her turn.

If John Gregg really needed any further proof that the campaign trail is no picnic, he got it Sunday evening in Greencastle.

The picnic he got featured persistent drizzle, a chill in the air and probably as many minds on NFL football as politics with the Bears and Packers playing as he spoke and the Colts and Steelers waiting in the wings at the time.

Yet under a damp, dark shelterhouse in Greencastle's Robe-Ann Park, Gregg didn't let foul weather rain on his parade. In fact, he seized the moment to quote King Solomon via Proverbs.

Clutching a cup of coffee to help keep himself warm, John Gregg chats with local Democrats as others go through the serving line.

"The rain falls on the just as well as the unjust," the Democrat candidate for Indiana governor said as he addressed a hearty local group of loyal Democrats. "And one of the 'justs' you get today is that because it's wet and rainy and cold, you're going to get a some speech."

It may have been short, but it was to the point.

"I'm running for governor because I believe I can made a difference," the 57-year-old Gregg said, noting that the hallmark of his 20 years as an Indiana public servant always has been his ability to get people to come together to "communicate and collaborate."

Gregg said he has always tried to separate politics from problem-solving.

For Indiana to reverse its problems and move successfully into the future, Gregg said state government must start working with and not against public education and local government.

"We have to quit declaring war on public education and work together," he said, listing teachers, parents, board members and business people as among those who need to be allies not adversaries in overcoming Indiana's educational issues.

"The answers don't come out of Indianapolis," the eight-term state legislator and six-year Indiana speaker of the House said. "The answers come from the bottom up."

Gregg, who voluntarily left office in 2002 to spend more time with his two sons and to enter the private sector, served as interim president of Vincennes University from 2003-2004. He currently practices in the Vincennes office of the Indiana law firm Bingham McHale

Regardless of where he has visited in getting his 2012 gubernatorial campaign under way, Gregg said Hoosiers have continually pointed to the economy and unemployment as their major concerns rather than the so-called "social issues."

Gregg, who calls Sandborn home in Knox County in southwestern Indiana, said he looks forward to returning to Greencastle and Putnam County over the next 14 months of his campaign and promises to return "many times over" during the ensuing four years should he be elected governor.

Gregg is expected to go up against Republican Mike Pence in the November 2012 general election for the right to succeed Mitch Daniels as Indiana governor.