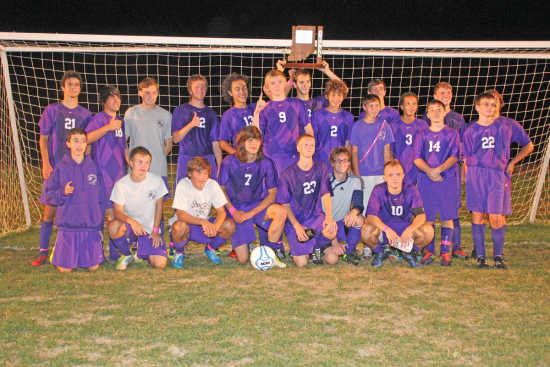 BROWNSBURG -- The Greencastle boys' soccer team entered Saturday's sectional final against the host Bethesda Christian Patriots hoping to walk away with a win. After 40 minutes of very physical action, they were happy to be walking away -- period.

The Tiger Cubs got dinged up with multiple players receiving varying degrees of injuries, but still left Bethesda Christian with the sectional title under their belt, defeating the hosts 2-1.

"We were out-phyicalled size wise," head coach Dave Lilly said. "They were huge, they were strong and they wanted to obviously send that message and the officials let it go and it kept getting worse and worse. It's disappointing. Guys get hurt, but the number of guys that we had get hurt for no good apparent reason was disappointing."

From the opening whistle, Bethesda Christian let it be know they were going to give the Tiger Cubs a little extra when it came to the physicality department.

It's no secret Greencastle's main weapon on offense is Sonney Basham and many teams have found it difficult to slow the senior down. The Patriots did just that, but what might not be known to most teams outside of the county is Greencastle is filled with scorers.

Late in the first half, after the Tiger Cubs failed to find the net, Basham led the team down the field, setting up fellow senior Mitchell Ball, who blasted the ball past Bethesda's keeper to put GHS up 1-0. They would take that advantage to the half.

"They shut Sonney down," Lilly confessed. "They covered well, Sonney maybe wasn't totally himself tonight and we haven't played in the lights and sometimes it's a little bit different. Mitchell's goal, the first goal, was awesome. They were tired at that point and I thought we would be able to extend the lead, so when we got that two goal differential, I felt pretty safe."

Greencastle built on its lead when Marcos Usso found the back of the net midway through the second half to put Greencastle up 2-0 and in control of the game. The second score seemed to trigger an even more physical approach by the Patriots.

Paul Heithaus went to the bench after reportedly receiving a kick away from the play, but things really got intense after Bethesda Christian was able to put its first score on the board late in the game.

The score infused the Patriots with energy, but the physical play continued. Lilly thought the officials should have gotten things under control earlier and after not saying anything at halftime, decided to voice his concerns in the second half.

"Late into the second half, I was calling for persistent infringement because the rules say it doesn't have to be one guy that fouls five or six times, as a team when they're coming and whacking people all the time, there's a rule for a caution for persistent infringement of the rule," Lilly explained. "You can be the next guy that happens to do it and it could be your first one off the bench, but you get it.

"I think they should have done that sooner rather than later and maybe it would have checked them. Once they got two down, they knew it was over and that's when a little bit of the ugliness started happening," he added.

The Greencastle faithful got a bit of a scare when Basham and Usso went down on the pitch during the same action. Basham's reaction of pounding the turf as he got to his feet personified how the team felt. Usso and Basham limped to the bench, but the margin of lead was enough for GHS to hold on for the win.

Lilly was pleased with the sectional win, but said his team's sights are farther down the road.

"I guess since it's the third one, for me it's still good, but we've got our goals set higher. I know the guys are happy, it's a good win and we'll take that trophy home, but we got to get some guys healed and get back to work and go home and hopefully we can get through the next round," he said.

The Tiger Cubs have until Thursday to heal up before they host West Vigo in the first game of the Class A Greencastle Regional at 5 p.m. Lilly said he would play it by ear, but some players might see limited action if the game is in hand to be ready for the sectional final on Saturday.