She married W. Ralph Taylor on July 21, 1940, at Gobin Memorial Methodist Church in Greencastle, where they were members until moving to Florida in 1998 where he passed away on Oct. 11, 2002. 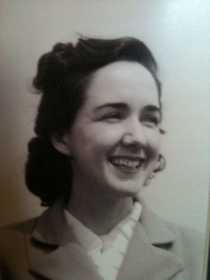 Evelyn Pictor came to Greencastle from Robinson, Ill., as a DePauw University student in the 1930s and pledged Alpha Gamma Delta sorority. She earned both a B.A. degree in English and an M.A.T. from the university.

She worked at DePauw as secretary to the academic dean, with her husband at Progressive Printing until 1956, and then retired in 1978 as an English teacher from the Greencastle Junior High, where she served as advisor to the newspaper, yearbook and many school theater productions.

She was a member of PEO philanthropic sorority and remained active in both Greencastle and DeLand chapters for more than 65 years and was also a member of Delta Kappa Gamma, society of women educators, during her teaching career.

One career goal of writing better soap operas was set aside after her adviser said he thought he could identify almost every university and local character and much more work would have to go into disguising them. She remained an avid watcher and critic of the genre, taping and fast-forwarding through scenes with poorly-scripted characters.

In 1950 she was a national finalist in the Pillsbury Bake-off Competition in New York City with a sweet roll she named "Almond Asterik" for its shape. Until her eyesight failed in the last few years she was an avid reader and bridge player.

Graveside services will be held at Forest Hill Cemetery in Greencastle at a date to be announced later.

If desired, memorial gifts may be directed to the performing arts programs of Greencastle Middle School, the Putnam County Public Library, or Gobin United Methodist Church.