Eunice A. Wilcox, professor emerita of music education and a member of the DePauw University School of Music faculty for 17 years, passed away early Tuesday, Nov. 8, 2011, in Lafayette, Ind. She was 85 years old.

Prior to teaching at DePauw, Eunice taught music education, voice and piano at Western Michigan and Michigan State universities. She previously taught in the Bryan, Ohio, public schools and at Zimmerman Junior High School in Flint, Mich. 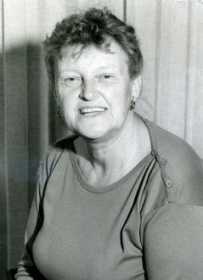 Dr. Wilcox joined the DePauw faculty as an assistant professor in 1970. She became an associate professor at DePauw in 1978

A mezzo-soprano, she toured as a vocal soloist for five years with American Savoyards, a professional Gilbert and Sullivan company. She also sang as a solo performer in many churches throughout the Midwest and Canada.

As a professor of music education at DePauw, she was also heard as a mezzo soprano soloist with the DePauw Orchestra in oratorio repertoire.

Her father, Culver, also a musician, advised Eunice to get advanced education degrees to then be able to teach. Growing up, Eunice had played in her high school band, played piano and developed her singing.

Eunice was the choir director at St. Andrew's Episcopal Church in Greencastle while on the DePauw faculty. Also at DePauw, she spent her free time supporting international students and their journeys through the education process here in the United States.

After retiring from DePauw in 1987, Eunice taught part-time voice, music education, and music appreciation at Martin University in Indianapolis.

She often talked about how she loved teaching adults. While at Martin, she wrote a text, "You Too Can Sign," to use with her students there.

Eunice had resided in West Lafayette for nine years, finishing her career of joyful service to the Lord by singing in the choir at Covenant Presbyterian Church.

Graveside services will be Saturday, Nov. 12 in Burr Oak, Mich., where Eunice will be buried next to her father, Culver. Longtime friend Janet Casey-Allen will officiate.

Memorial services will be held at a later date at Covenant Church in West Lafayette.

Online condolences can be shared at Soller-baker.com.