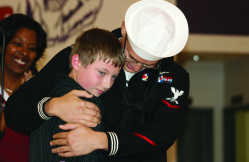 As Jesse reads a speech for his classmates, which he prepared about having his brother, Cody, deployed in Afghanistan, Cody surprises him and immediately takes him in his arms.

One of the greatest surprises a boy can have is what Greencastle Middle School student Jesse Anderson experienced Wednesday afternoon.

As the school held its Veterans Day festivities a few days early, Jesse was the main event as his brother surprised him at school after returning home from Afghanistan.

Jesse, a seventh-grader, was set to speak in front of his classmates Wednesday afternoon about having his brother Cody deployed in Afghanistan with the Navy. During what was an emotional speech for the audience, Jesse explained what it was like to have a brother in the military and his feelings of missing him each day.

Toward the end of the speech Cody appeared from the locker room in the gym, where the event was held. As he took the short walk to stand by Jesse's side, there were smiles and tears all around.

Jesse however, thinking it was principal Tamra Walker who was standing next to him, showed little emotion except for a bit of nervousness.

"This morning I told my mom he better not show up behind me," explained Jesse as his mother, Kim, looked on laughing.

Jesse went on to say his mom had told him there was no way that could happen as Cody was still in Afghanistan. Little did he know at the time his mother was keeping a very big secret and holding in her excitement.

"He wanted to surprise him in his classroom," said Kim of her son Cody. "He came back from Afghanistan on Friday. Jesse had no idea he was even back in the States."

Cody, an active member of the Navy, returned from Afghanistan on Friday, after being deployed for three months. He had known since early October that he was coming home and wanted to do something special for his brother.

After coming up with the idea to surprise Jesse at school, his mother then brought it up to one of Jesse's teachers during a parent-teacher conference. The teacher passed the word along to guidance counselor Cathy Asbell, who put the plan into action.

"It just kind of came together," said Kim. "I was just so excited.

As the gym emptied out and the two brothers were able to exchange a few words, Cody was able to talk about his journey home and back to his brother.

"I was very nervous, but it was definitely worth it to surprise him," said Cody. "To see the look on his face, it was awesome."

Although, only here until Sunday the two are already making plans of what they are going to do with their time together.

"Just going to go home and take it from there," said Jesse with a smile. "I'm going to fight him, wrestle."

The school also took the time to recognize all students who have friends and family currently in the military. They also heard speeches from Army National Guard Sgt. Brett Weliever as well as state representative and Vietnam veteran Jim Baird.