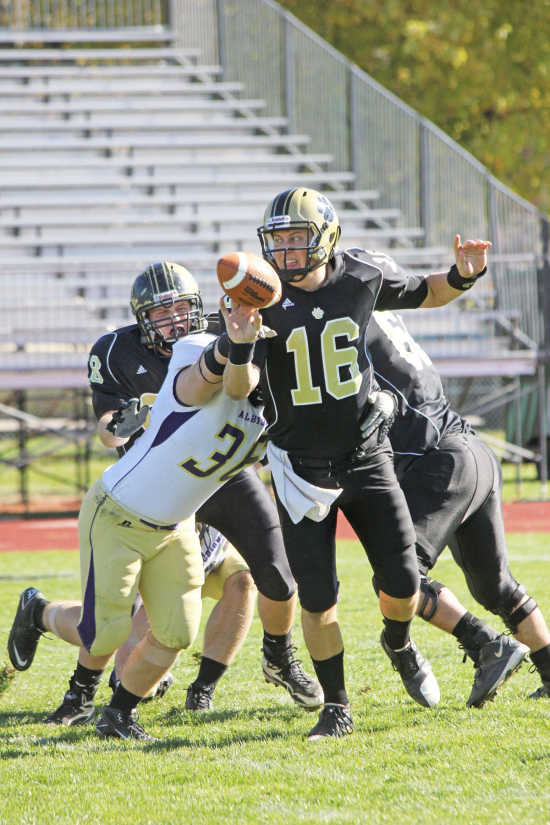 Will King and the DePauw Tigers host Wabash in the 118th Monon Bell Classic Saturday at 1:07 p.m.

Saturday's matchup between DePauw and Wabash marks the 118th meeting between the two with the Monon Bell at stake. The Bell series sits at 37-36-7 in favor of DePauw, with Wabash holding the overall series lead 55-53-9 lead.

This season DePauw and Wabash find themselves on opposite ends of the spectrum. Wabash sits at a cool 9-0 entering Saturday, while DePauw has a record of 4-4, but riding a three-game winning streak. But one thing to keep in mind when discussing the Monon Bell Classic, records mean little.

According to DePauw's website, in the last 75 meetings, the team with the better record won just 37 times. Think playing at home is a major factor in the outcome? Think again. In 111 games played at either campus, the series is 53-50-8.

Don't forget, last season DePauw rolled into Crawfordsville with a 9-0 record and were shutout by the Little Giants 47-0. The Tigers will have the chance to return the favor this season, but it's going to take a Herculean effort.

The injury bug has bitten the Tigers this season, especially at the quarterback position. The Tigers have had to use four quarterbacks this season. Ethan Schweir began the season under center, with Jackson Kirtley, Drew Seaman and Will King.

The DePauw offense is only averaging 16 points a game, while Wabash is putting up close to 33 points per game. Both defenses have limited opposing offenses, with the Tigers allowing 17 and the Little Giants 10.

A big factor that has helped Wabash achieve a perfect record thus far is the ability to have a balanced offensive attack. Wabash has three rushers that have rushed for more than 300 yards this season, with Vann Hunt leading the way with 537. Quarterback Chase Belton in the team's second leading rusher with 403.

Belton has also been able to get thing done in the air, throwing for 1,724 yards and 18 touchdowns. King started for the Tigers in their last outing against Albion, helping the Tigers pick up a 7-3 win.

The Tigers have used a variety of runners in the backfield, with Armani Cato leading the way with 274 yards on the season. Bryan Coleman led the way for the Tigers against Albion with 40 yards on 18 carries.

DePauw is utilizing a group of young talent this season and one of those contributing to the Tigers' late season surge is Greencastle grad Jordan Hickam. Hickam has played in four games this season and recorded a touchdown against Austin.

He also led the team in receiving yards against Albion with 27 yards on two catches and ran the ball one time for 15 yards.

The biggest thing DePauw will need to do is slow down the Little Giants out of the gate. Wabash is a quick starter, posting 92 first quarter points this season, while limiting their opponents to a mere 10 points for the season.

Blackstock Stadium will be rocking this Saturday when the stands are filled to capacity with the Black and Gold of DePauw hoping to deal the Scarlet and White of Wabash its first loss of the season and keep the Monon Bell on the DPU campus.

The 118th Monon Bell Classic kicks off at 1:07 p.m. at Blackstock Stadium. The game will be carried live on DePauw's WGRE 91.5.