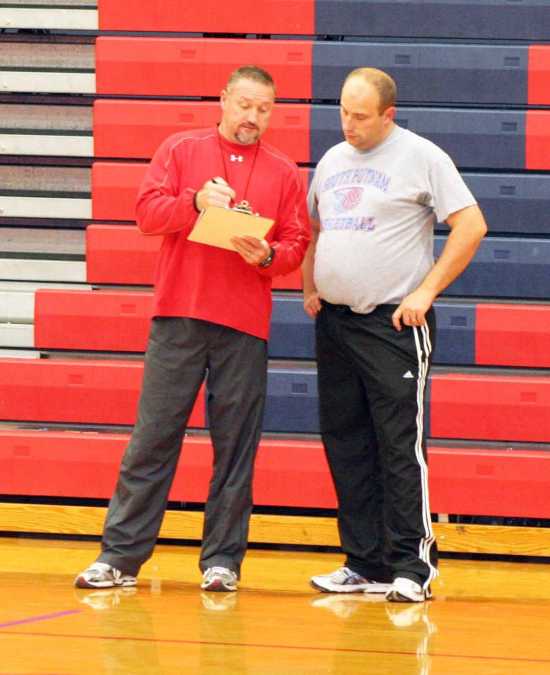 Under normal circumstances this would be a busy week for South Putnam's Troy Burgess.

As the coach of the Eagles' sectional championship football team, his days would be packed with preparing the squad for Friday's regional matchup with Guerin Catholic.

As the first-year coach of South Putnam basketball he would be busy installing a new system, evaluating talent and preparing the Eagles for a season on the hardwood.

But these aren't normal circumstances. Call Burgess a glutton for punishment, but he's pulling double duty this year as head coach of the two highest profile sports at the school.

"It's been hectic but it's been a very pleasant hectic," Burgess said. "It's been a lot of fun. There are a lot of things going on right now. It's a great problem to have -- if you even want to call it a problem."

Burgess isn't a stranger to the situation of coaching both sports. During his tenure at Owen Valley, he spent the 2001-02 school year pulling double duty.

Things worked out well for the Patriots that year, as they went 9-2 in football and 14-8 in hoops.

Of course, the twist this time is the Eagles (10-2) winning sectional with last week's 40-22 win over North Putnam. Burgess is truly in a unique situation. Of the 315 IHSAA head football coaches, only Burgess is also head basketball coach.

Five other football coaches also helm wrestling programs, but each of these exited the tournament in the first two weeks.

Knowing he had a good staff was key to Burgess deciding to add basketball to an already full plate. He saw two other men as lynchpins in the plan falling into place.

"When we decided to do this, one of the first things I had to do was make sure Coach (Chris) Jones was going to come back and be a part of the basketball staff. And I had to get Coach (Brian) Gardner involved and make sure we could get him backing basketball. When he agreed to do that, I knew this was something we could make happen," Burgess said.

Gardner has been the man making things go for the Eagle basketball program in recent weeks. Gardner spent two years as the South Putnam head coach, so his experience has been invaluable.

"He's been a head basketball guy, he's done it his whole life. This is old hat for him," Burgess said. "He's captained the ship for the last three or four weeks of preseason and he's done a lot this week also."

It's good Gardner has been handling things so well because the rest of the men on staff are pulling double duty. Besides Burgess, JV coach Jones, freshman coach Ben Latham, eighth grade coach Nathan Aker and seventh grade coach Ryan Gilman are all on the football staff.

The overlap has caused some juggling this week, mixing in later evening practice, one day of Gardner flying solo and even a 6 a.m. practice today.

"With any luck Friday night, we'll be on the same schedule next week," Burgess said.

Whenever the Eagle football run ends, the coach expects about 12 more players to come to basketball tryouts besides the 16 he already has.

The first South Putnam basketball game is currently scheduled for Wednesday, Nov. 23 at 7:30 p.m. at Turkey Run. Another week or so of football would change all that though.

Last week's sectional win was Burgess's second at South Putnam. In 2009, he led the Eagles to a sectional win in his only season at the helm.

Asked about the possibility of adding a basketball title, he smiled a big smile but again deflected the credit.

"It would be great. All that says is I've had great assistant coaches and, more importantly, I've had great players," Burgess said. "Both of my assistants on the 2009 baseball team are now football assistants in Ryan Gilman and Nathan Mullis.

"It's been the same group of guys."