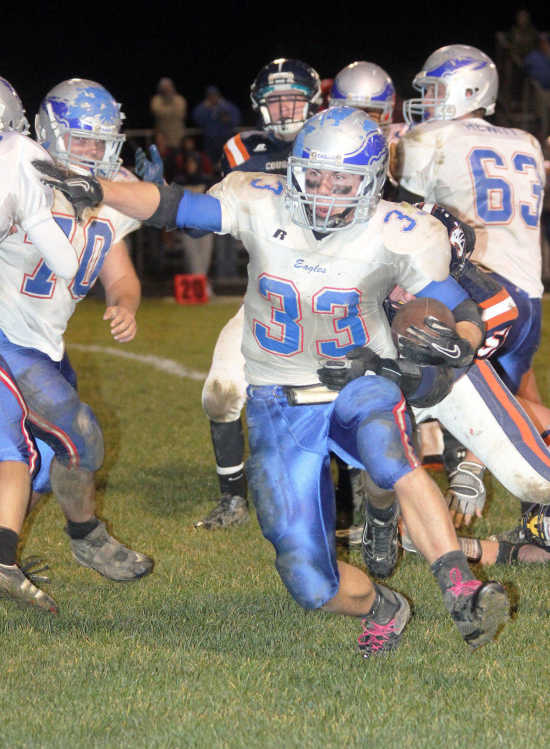 Senior Rob Gibson and the South Putnam Eagles will roll into Guerin Catholic Friday at 7:30 p.m. with the winner being crowned the Class 2A Regional title.

So far the South Putnam Eagle football team has defeated a Wildcat, a Panther and a Cougar en route to its regional matchup with Guerin Catholic. Ironically, the Eagles will be battling the Golden Eagles, a matchup of dominant birds of prey that have put up some impressive numbers in sectional.

South Putnam head coach Troy Burgess said it was a little difficult to regain focus on Monday after defeating North Putnam for the sectional title.

"We've had a great week. Monday was tough," South Putnam head coach Troy Burgess said. "We're still flying pretty high after that game Friday night. As I told the kids on Monday, 'We've got a football game to play this Friday', but as I'm telling them that, I realized and told them it starts with me.

"I had to get past that myself," he continued. "I'm a grown man trying to get past that; I can't imagine being a teenaged young man and being the guy playing the game as they were."

Tino Smith has thrown for 2,335 yard with 26 touchdowns and only 12 picks. He's averaging 195 yards per game. He's also the team's third leading rusher with 262 yard. He's had three four-touchdown games for Guerin Catholic.

The Golden Eagles have two runners topping 400 yards. Drew Dehnke leads the way with 600 yards rushing, with Mitchell Paige adding 404. The duo has combined for 12 touchdowns on the year.

Dehnke and Paige are also the team's top receiving threats. Paige leads the way in that department, hauling in 64 catches for 1,037 yards and 11 touchdowns. Dehnke had 12 receptions for 160 yards.

Burgess acknowledged Guerin Catholic likes to pass the ball, but they won't hesitate to put the ball on the ground when needed.

"They do," Burgess said of the Golden Eagles love of passing the ball. "In their sectional championship game, they didn't have to throw it much. Shenandoah came out and played a style of defense that really tried to take the pass away and Guerin Catholic was able to run the ball. They have very good backs, they're very quick and athletic.

If you're within earshot of Putnam County, you know the numbers senior Rob Gibson has been putting up. Coaches always talk about peaking at the right moment and Gibson could be doing that. He posted his third 250-plus yard rushing game of the season, putting up a Class 2A sectional single-game record 269 yards against North Putnam last week.

For the season, Gibson has posted 1,937 yards and a whopping 29 touchdowns on the ground. He's also the team's leading receiver with 569 yards and seven touchdowns. There's no doubt Guerin Catholic has put an emphasis on the No. 33 in preparation for Friday's game.

Another number they want to keep in mind is the number eight. That's the current win streak of the Eagles, a streak that has given South Putnam the swagger to line up with any team and know they can hold their own.

South Putnam also benefits from a solid quarterback that doesn't make a lot of mistakes. Seth Hammond has thrown for just four interceptions this season, while tossing 11 touchdowns. He's not called on to win games, but he does what every coach wants their quarterback to do -- not lose the game.

Hammond is patient and efficient, with a quick release and good field vision. If the Golden Eagles are able to bottle up the South Putnam running game, especially Gibson, it might be Hammond who gets the call to make things happen.

Following the Eagles' win over North Putnam in the sectional final, South Putnam head coach Troy Burgess gave a lot of credit to his defensive coach Nathan Aker and rightfully so. The Eagles were able to hold the explosive North Putnam offense in check, allowing just 22 points in the game. Aker and his defensive core led by Wade Custis, Cody Heller and Sawyer Arnold will need to get pressure on Smith in the pocket and force the quarterback into some bad decisions.

Burgess noted that Guerin Catholic is growing by leaps and bounds and knows that come Friday at 7:30 p.m., it won't be a walk in the park.

"They're an up and coming school. They've gone from 1A to 2A and they're probably to 4A the next time. They're really growing right now. It's a growing school area right there and we expect a heck of a ball game with them," Burgess said.

South Putnam is donning silver helmets, the same style the 1986 IHSAA State Champions wore 25 years prior on their march to a state championship. Coincidence? Fate? We'll just have to sit back and let time decide.