Want more? You will when you hear this 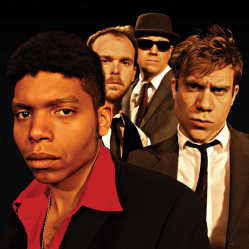 This man wants some more.

But listen to the sophomore album by JC Brooks & the Uptown Sound -- appropriately titled "Want More" -- and you realize it's much more than this.

This high-energy four-piece wants more of pretty much everything. The sound needs to be as big, as loud and as energetic as possible.

The title track kicks off the record, released Oct. 25 on Bloodshot Records, appropriately. It's a high-energy manifesto of the direction the band will take over the next 37 minutes. They get the most out of their sound -- attitude without sacrificing soul, volume tempered by tenderness.

It's the kind of music played by well-dressed men in a dingy, smoke-filled club -- a metaphor for the contradictions that are the "Uptown Sound."

Normally when soul musicians turn up the volume and tempo a little bit, people start calling it funk. With these guys, though, one letter changes. The frenetic energy of their live shows have them being compared to punk acts. They've been described as "a meeting of Otis Redding and the Stooges."

The live shows must take things to another level, though, because on record these guys are well grounded in the R&B, soul, funk tradition. It's music that could have been made in the 1970s, but contemporary listeners are fortunate to have it right here in front of us.

Of course, the band isn't without its modern influences. Last year, they got some attention with their viral hit "I Am Trying to Break Your Heart," a cover of Wilco's 2002 song.

The Uptown Sound version, though, is a complete re-imagining. Far from the moody, vaguely psychedelic original, the cover is an in-your-face, rump-shaking boogie.

The track is even strong enough that it got the attention of Wilco's Jeff Tweedy, who joined Brooks and the boys onstage for the song earlier this year.

Wisely, they included the song on this collection.

This album isn't built on the strength of other people's music, though. Among the thumping numbers, "Baaadnews" is a standout, giving away its attitude with simply with the spelling of the title.

The band also displays a wonderful aptitude on more traditional-sounding soul on "I Got High" and "Don't Lock the Door."

And of course, you can't truly call it soul if it isn't tender once in a while. "To Love Someone (That Don't Love You)" and "Awake" show this ability wonderfully.

"Missing Things" is a gem tucked away late in the album. Different from the rest of the tracks, it's reminiscent of Rod Stewart and the Faces' ability to weave R&B, rock and folk influences into ballads in the early '70s.

It's an example of the excellent music a band like this can make when it's truly open to any influence.

On "Want More" JC Brooks & the Uptown Sound give us just a taste of what they can do. Apparently the real treat is seeing them live -- an opportunity this Central Indiana music fan anxiously awaits.

With a wide array of influences and an electric live show, this should be a band to keep an eye on.