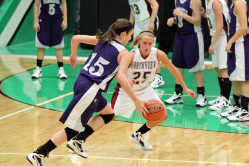 The Knights, without any seniors and starting three freshmen, played well in the first quarter as Greencastle showed better passing and decision making than in the game against Terre Haute North Thursday evening.

Neither squad was able to break away from the other as the Tiger Cubs took a two point lead into the second quarter, but a 9-4 run in the first three minutes of the second quarter put Greencastle in command of the game.

Up 24-15 at halftime, Greencastle ratcheted up the tempo of the game as they nearly doubled their halftime advantage by the end of the third quarter.

The Tiger Cubs grabbed most of their fourteen points in the back half of the quarter, which was capped off by Jessica Lenihan's three-pointer before the buzzer sounded.

The shot took some of the steam out of the Knights, and what wasn't lost then was soon forced out as Greencastle pushed the tempo of the game even harder, forcing multiple Northview turnovers while ensuring that the Knights couldn't catch up as the Tiger Cubs notched their first win of the season.

With eight different players getting on the score sheet, led by Taylor Pruitt's game-high 15, the balance of the team was better for head coach Bradley Key.

"I thought we came out and played a lot better -- what we call Greencastle basketball. We pushed the ball really well. Our seniors came in and played great," Key said.

"Taylor Pruitt was a beast on the boards. She's very athletic and we have to use that to our advantage, which we did tonight. Between our seniors, we ended up with 35 points. That's awesome."

"Erin Beck came in and knocked down some three's and more importantly, played some great defense. We've been looking for her to be a little more aggressive on that end and Erin did," Key added.

Key was quick to point out that there were still things to tweak in the line-up, with Greencastle receiving a final game in the tournament against South Vermillion Saturday.

"Right now, we're still figuring out our rotation and who fits in where. We got to use our bench quite a bit more tonight than last night because we had more pressure put on us by a strong Terre Haute North team," Key said.

"Tonight we had some freshmen come in and play. This was a whole team effort, which is exactly what you want as a coach. That's what we're looking for going into tomorrow."

"It was great team basketball tonight. Shelby Earl only had two points tonight, but she played great defense and passed the ball well. It was a good team win for us and it feels good to go home and know what our identity is a little bit better than we did the night before."