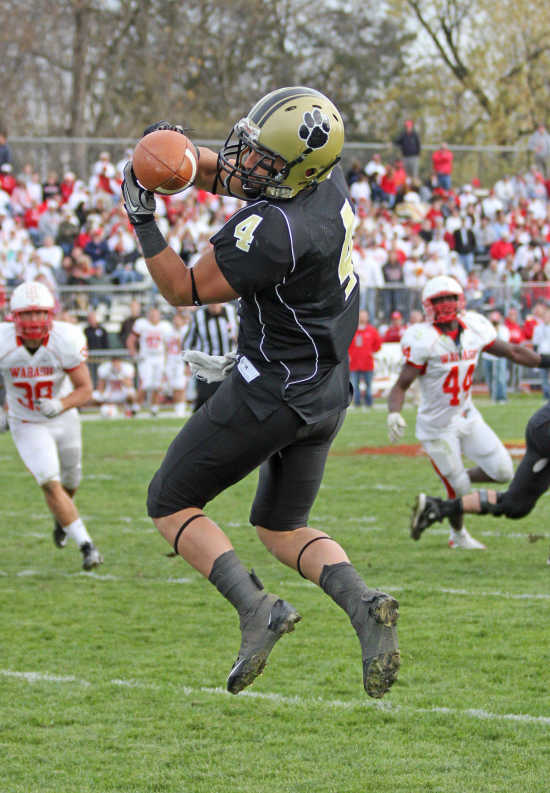 To look at the score alone, a fan wouldn't believe how close the offensive production was during the 118th Monon Bell Classic. Wabash cruised to a 45-7 win, but only managed to outgain the Tigers 180-150 offensively. The deciding factor was the Little Giants' defense and special teams.

Wabash's defense and special teams accounted for 28 of the Little Giants' 45 points on the day, including two interceptions returned for touchdowns and a fumble recovery in the endzone for a score.

Looking at the stats coming into the game, it was clear Wabash is a quick starter and they proved that once again Saturday. They scored 24 first quarter points, with Jonathon Koop returning a Will King pass 22 yards for a score and Wes Chamblee returning a punt 44 yards for a score.

After the game, DePauw head coach Robbie Long acknowledged you never want a team to jump out quick, no matter who your opponent is.

"You never want to fall behind," Long said. "Regardless of what quarterback you have, it makes it a lot harder for you to win when you're struggling to put things together on offense. We just couldn't get enough momentum going to change field position and have positive play on offense."

DePauw's defense played stout all day and held the Little Giants offense scoreless in the second quarter. However, Pat Clegg was able to recover a King fumble in the endzone to tack another seven points to the score, giving Wabash a halftime lead of 34-0.

The Tigers have had numerous injuries at the quarterback position and Saturday's Monon Bell Classic was only King's second start for the Tigers. King never looked comfortable under center and Wabash was able to capitalize.

DePauw scored the first points of the second half as senior Jon Ellis twisted his way into the endzone from five yards out just before the end of the third quarter. What little momentum the Tigers had quickly went away at the 13:49 mark of the fourth quarter.

Wabash's Denzel Wilkins jumped the route and snagged King's pass and returned it to the house 28-yards for the Little Giants' second pick-six of the day, making the score 38-7 in favor of Wabash. They added another score on an Andy Walsh four-yard run with 3:57 left in the game.

King threw for 111 yards on 16-of-36 passing with three interceptions. Ellis led the way on the ground, rushing for 43 yards on 14 carries.

DePauw was able to hold Wabash quarterback Chase Belton in check for the most part Saturday. Belton rushed for 38 yards and passed for only 21 yards and failed to score a touchdown.

Wabash entered the Monon Bell Classic ranked No. 9, but as Long pointed out after the contest, it doesn't matter what an opponent is ranked if you fail to execute.

This marks the third consecutive Monon Bell Classic win for Wabash and ties the series for the possession of the Bell 37-37-1. Wabash leads the overall series between the two schools 56-53-9

Wabash ends the regular season with a record of 10-0, while DePauw was 4-5.