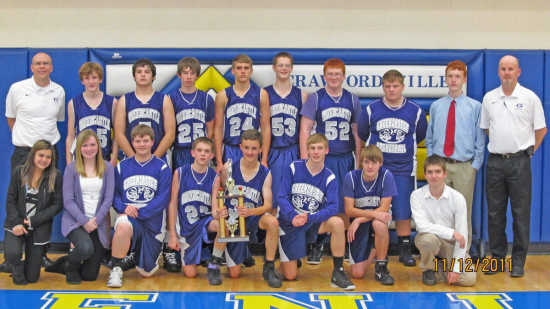 The Tiger Cubs faced Southmont in the tournament opener and had to shake off some early season jitters before holding on to a 33-30 victory.

Greencastle committed 17 turnovers in the game, but stellar defense by guards Ryan Coble and Zach Wilkerson provided seven and five steals respectively and was enough to preserve the win.

The Tiger Cubs were led in scoring by Brandon Gierke with 10 points, and Cole Edgar who chipped in eight. Coble dished out a team high eight assists and Edgar grabbed seven rebounds in the morning session.

In the afternoon title game, the Tiger Cubs faced Seeger. The two played evenly in the first half with Greencastle heading to the locker room with a two point deficit.

Seeger extended that lead to 28-25 going into the final quarter. The Cubs then outscored their opponents 11-4 in the final stanza for the 36-32 victory. Ryan Coble had another big game knocking down 10 of 11 free throws and finishing the day with 13 points and dishing out six assists. He was helped out in scoring by Brandon Gierke who had 12 points and pulled down 12 rebounds. Defensively, Jacob Lewis had three blocked shots on the afternoon.

The Cubs are in action again Thursday when they travel to North Putnam for their conference opener against the Cougars.