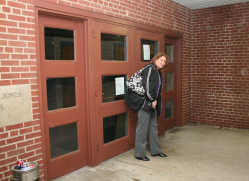 All business completed in the Putnam County Courthouse Annex, auditor Stephanie Campbell locks the door on the building following Tuesday night's Putnam County Council Meeting. After a decade of service to the county, Tuesday's meeting was the last official piece of business to take place in the former Jones School.

Nearly a decade of county business in the Putnam County Annex came down to a meeting that was only about half an hour long.

Tuesday's meeting of the Putnam County Council -- the last meeting in the building before its closure -- consisted of a series of approvals of fund transfers and discussions of future meeting dates and locations.

And then the Annex was simply closed.

Assessor Nancy Dennis, treasurer Sharon Owens and circuit court judge Matt Headley all came before the board for fund transfers, requesting that money go from one part of their department budgets to another.

All transfers were approved.

The council also approved the appropriation of money from federal grants into the Putnam County Airport budget.

However, schedule conflicts at the Circuit Court make it impossible.

At this point, the EOC at 1600 W. CR 225 South, Greencastle, will be the meeting place. Officials have expressed apprehension about the site, given that many residents don't know where it is.

Council president Darrel Thomas suggested the council consider meeting on the east side of the second floor common area in the Putnam County Courthouse.

Decisions on permanent meeting places will be made later.

A change in the December meeting date was approved. Much of the final meeting of the year revolves around housekeeping to county budgets. The council's normal meeting date would be Tuesday, Dec. 20.

Unfortunately, auditor Stephanie Campbell must have changes submitted to the state by Thursday, Dec. 15.

To give Campbell time to get things submitted, the council will meet at the EOC at 7 p.m. Thursday, Dec. 8.

With the night's business complete, the Annex's service to the county as an official public building came to an end. The gymnasium area will continue to serve as a storage space until a permanent solution can be found.