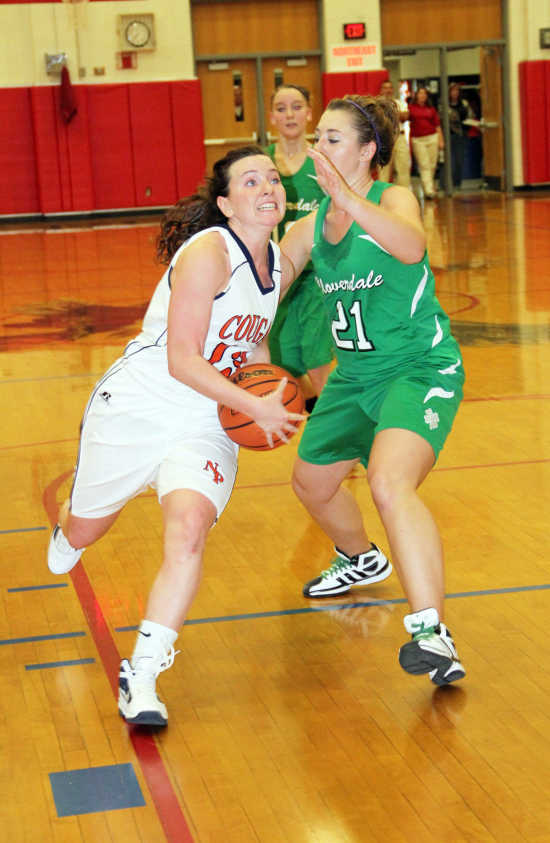 In the consolation game of the Putnam County Tournament, North Putnam overcame a halftime deficit as they took third place over Cloverdale 44-32.

Both squads came out slow to start the first half as the Cougars took an early lead. Cloverdale tied the scores at 7-all after a Paige Gruener three pointer but would be down at the end of the first quarter as baskets by Madi Asbell and Kayla Kientz gave North Putnam an 11-7 lead.

The Clovers were quick to respond in the second quarter as Bailee Stevens hit two lay-ups to tie the score and Gruener knocked down another 3 to take a 14-11 lead before two minutes had elapsed.

Cloverdale maintained the lead through the rest of the half, though the Cougars would pull within one before halftime at 19-18.

North Putnam got defensive out of the halftime break, forcing 12 Clover turnovers in the period, while the lead traded hands a couple of times. Tied at 24-all, a LeeAnn Davis bucket would give the Cougars the lead for good.

Holding a four point lead after three quarters, the Cougar defense continued to press and create opportunities, which North Putnam began to convert with more regularity in the final frame.

The ball went inside, where Kientz and Sam Lucas recorded 10 of the 14 points scored in the period for the Cougars, allowing North Putnam to take control of the game until the final buzzer sounded.

Defensive adjustments were the key to the second half success, according to North Putnam head coach Jim Brothers.

"We pressed in the first half; we just weren't in the right positions. We were up a little bit too much and they through the ball over our heads and we were chasing all night," Brothers said.

"In the second half, we made some adjustments. We kept the ball in front of us and got them into some trapping situations. Our runners got some good angles, made some steals and we got some easy looks."

Offensively, Brothers said his squad was tired after the Friday night game.

"I think in the first half both teams looked sluggish. It was the first time we played back to back and our legs were a little tired," Brothers said.

"We've got to do better against the zone. We did a little bit better job in the second half finding the open holes. We've got be more comfortable against that.

"If we make free throws and some of the easy shots we missed, we'd have a little bit more breathing room," Brothers added.

"I thought at times we did a better job of not turning the ball over, but then at key times we didn't. We had over thirty turnovers again tonight. At times we handled the pressure, but at key times, when we needed a big possession, we turned it over," Langdon said.

"Turnovers have been an issue so far, but tonight it was the offensive rebounding. We knew that North Putnam was big and aggressive and that they'd go after rebounds. We honestly didn't box out a lot."

"Overall, I was proud of the girls' effort tonight. We were obviously a different team than (Friday) night and I told the girls that. We played a much better game, we just didn't do enough to win the game," Langdon added.

Next for Cloverdale is a trip to Turkey Run. Langdon said the team should keep the positives from Saturday night going.

"We started on the right track tonight. With our deep bench and being a little bit smaller, we need to speed that game up and press. With eleven players, we want to pressure the whole game," Langdon said.

"We pressed all game tonight and while we had a lot of turnovers, we forced thirty turnovers, which was great. We've not seen that all year long. If we force turnovers, handle the ball and reduce our turnovers, we'll be in those games."

Brothers said that they would need to be ready for their next game.