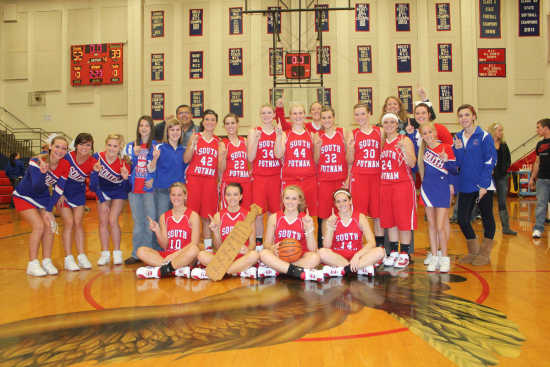 With just four games under its belt, South Putnam has already surpassed its win total of last season. The Eagles picked up its third win of the season by defeating Greencastle 52-39 to claim the 2011 Putnam County Tournament championship Saturday.

South Putnam has utilized a pressing defense early in the season and it caused the Tiger Cubs some problems in the championship. Not only did it result in points, but it resulted in two of Greencastle's main threats being in foul trouble most of the night.

"That press has been good to us through this county tournament," South Putnam head coach Lindsey Blackman said. "I'm proud of the seniors. They brought it tonight and they were ready to play. It's great having a bench that can step up and hit shots when the offense is struggling, so overall it was a good team win."

GHS head coach Bradley Key acknowledged the press did cause his team some difficulty.

"You have to give a lot of credit to South Putnam," Key said. "Coming into it we knew they were going to pressure us and we struggled with that a little bit. We talked about it this morning about what we should do and we just have to be a little more solid, but South Putnam did a great job and they knocked down a lot of shots. It felt like they were hitting everything."

The Eagles were able to open the game on a 10-0 run and led the Tiger Cubs 10-7 after one quarter of play. South Putnam was able to extend its lead in the second quarter, as Greencastle's Taylor Pruitt had to take a seat after picking up her third foul.

South Putnam's Jenny Thompson, Leanna Masters, Mattie Varvel and Alex McHugh scored four points each in the second quarter, helping the Eagles take a 28-22 lead into the half.

Greencastle struggled the previous night during the third quarter and Saturday's championship was no different.

South Putnam continued its strong play in the third, scoring nine points and keeping the pressure on GHS. Greencastle on the other hand struggled, missing all of its shots from the field, with its only points coming from Shelby Earl and Hannah Wainman at the line.

The teams entered the final stanza with South Putnam leading 37-24, but Greencastle was finally able to find the spark it needed and started to make a run.

About midway through the quarter, the Tiger Cubs, led by Wainman and Earl began chipping away at the lead, but it seemed that for every bucket GHS made, South Putnam had an answer. In fact, both teams scored 15 points in the final quarter, giving South Putnam the win 52-39.

Following the game Key addressed the third quarter lull and was confident his team would rebound and fix the issue, even though he's struggling to put his finger on it.

"I'm not sure yet," Key said. "I wish I knew, because if we knew we'd correct it. I think some of it is we're not knocking down easy buckets. Man, we got the ball where we wanted it, and it happened last night against North Putnam, we get the ball where we should and we have to make sure we finish on those.

"It will come. They don't hang up banners for county, so you don't want to be playing your best basketball in November and we have to get better and we will. I have a great group of girls and I'm proud with how they fought. At no point did I think they gave up. I think we just didn't hit some shots, made some silly turnovers, but it's a growing experience," he added.

On the flip side, Blackman, in her first year as the Eagles' head coach, described how it felt to win the championship following the game.

"It feels really good. It feels so good to build the confidence in these girls when it comes to the game of basketball. They have it in other sports and it's good to let them know they can have it in basketball. They have the athletic ability, they have the talent and they can go as far as they want to go. So, it's nice to get them to realize that by winning early," Blackman added.

After snapping a team photo post-win with the county paddle, the girls removed their shoes at midcourt and raced out of the north doors of the gym and took a right into the pool area before plunging in for a victory swim. Soon, Blackman and assistant coaches Kate Atkinson and Johnnie Briones joined in the fun.

Following her dip with the team, Blackman explained what the team had to do as the season progressed.

"We have to refocus because winning county doesn't mean anything when it comes to West Vigo. We have to refocus Monday and get ready to play. It gives us confidence going into each game, but we have a job to do and we can get better and there's things that we still need to get better at and they know that. It will be a work in progress through the season," Blackman said.