A toast to Coke in Terre Haute 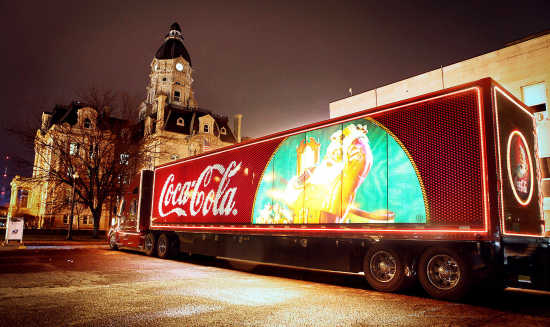 TERRE HAUTE -- As Coca-Cola marks 125 years of refreshing the world, the company is thanking everyone who has helped make this milestone possible. On Monday Coca-Cola thanked Terre Haute -- the birthplace of the iconic Coca-Cola glass contour bottle -- with a special announcement and community celebration.

"Today's moment of thanks is about the people of Terre Haute, past and present, who have helped Coca-Cola reach this milestone," Coca-Cola Refreshments Senior Vice President of Sales Mark Rahiya said.

"In 1915, innovative Hoosiers made an important contribution to Coca-Cola's history by creating the iconic Coca-Cola contour bottle. Today we celebrate everyone in Terre Haute and Indiana who loves and enjoys Coca-Cola."

As reported in Monday's Banner Graphic, the green hue of the glass Coke bottle owes its distinctive coloring to sandstone from a quarry along Fern Cliffs in Putnam County's Madison Township.

Rahiya announced that the Coca-Cola Co. will donate 25 cents for every six-pack of 8-ounce Coca-Cola contour glass bottles purchased now through Dec. 31 to United Way of the Wabash Valley. 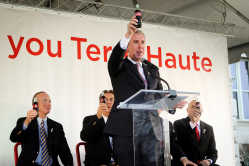 Coca-Cola has also partnered with the Vigo County Public Library to install a Coca-Cola and Hoosier archive exhibit as part of an ongoing effort to encourage educational programs for students of all ages around the world. The exhibit is open now through Friday, Dec. 16.

"Coca-Cola has been a part of the Indiana community for more than 100 years, and I am happy to be among those helping them honor the people of Terre Haute and recall this city's important place in Coca-Cola's proud history," Gov. Daniels said.

"Coca-Cola has played a special role in Terre Haute's history since the company began operations here in 1904," Terre Haute Mayor Bennett said. "I am honored to be here today as Coca-Cola thanks the people of Terre Haute for the role our community has played in its 125-year history, including the creation of the Coca-Cola contour bottle. I look forward to continuing to build Terre Haute's strong partnership with Coca-Cola, now and into the future."

While the company celebrates the history of its flagship brand for this anniversary, Coca-Cola also looks to the future through its 2020 Vision -- its roadmap for the future. As part of the 2020 Vision, the company plans to double its system revenue from 2010 to 2020, thus accomplishing in 10 years what has taken the first 125.

The company has also set sustainability goals as part of its commitment to being a good steward of the environment and a partner with communities around the world.

"Our goal is to help shape a better future for Terre Haute and communities around the world," Rahiya said. "We believe that collectively, we can all make a difference. Our community partnerships give us the confidence to know that the best days are ahead."

Coca-Cola was created on May 8, 1886 in Atlanta, Ga., by Dr. John S. Pemberton and first served at Jacob's Pharmacy.

In 1915, a design from the Root Glass Co. of Terre Haute, Ind. won Coca-Cola's enthusiastic approval and was introduced in 1916.

The Coca-Cola contour bottle became one of the few packages ever granted trademark status by the U.S. Patent Office. Today, it's one of the most recognized icons in the world.