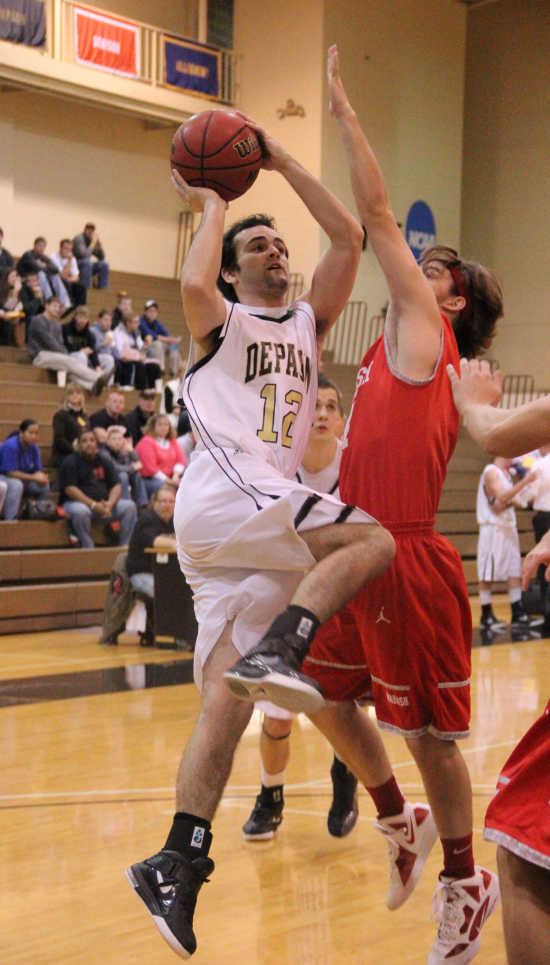 DePauw sophomore Alex Payne drives hard to the hoop during Sunday's championship of the Mike Rokicki Community vs. Cancer tournament.

It was literally a tale of two halves in the ninth annual Mike Rokicki Community vs. Cancer tournament Sunday between DePauw and Wabash. Both squads struggled in the first half, but the Little Giants caught fire in the second half en route to a 62-47 win over the Tigers.

In the first half Wabash shot just 36 percent from the field, but lit things up in the second, connecting on 75 percent of its shots from the field, outscoring DePauw 38-23 in the process.

After being tied up 24-all at the half, DePauw hit just nine shots in the second half and watched at Wabash started strong and continued scoring the rest of the game.

The Little Giants opened the second half with five unanswered points to gain a small lead, but DePauw was able to respond early. A three-point play by Barry Flynn brought the Tigers within three at 31-28, but Wabash was able to find the bucket. They steadily built their lead, ultimately gaining a 10-point advantage, 47-37, with 9:06 left on the clock.

Flynn closed the gap to eight points at 49-41 with 5:31; however, Wabash went on an 8-0 run to lead 57-41 with 3:03 on the clock. DePauw got back-to-back three pointers from Sean Haseley and Flynn to close out its scoring, but a pair of free throws by Aaron Zinnerman sealed the 62-47 victory for the Little Giants.

The game started well for the Tigers as senior Tommy Weakley hit a three-pointer to open the game and Haseley connecting on two free throws to give DPU a 5-0 advantage early on.

DePauw held an advantage for most of the first half, but allowed Wabash to hang in the contest. With 6:05 on the clock, Wabash's Brian Shelbourne hit a layup to tie the game 17-all.

The Tigers and Wabash traded baskets over the final five minutes. DePauw's Camron Burns gave DPU the lead with :34 on the clock, but Wabash responded when Lawrence Milton hit a layup with :08 left and tied the game 24-all at the half.