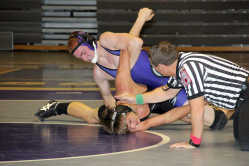 GHS junior Carter Lewis puts a move on his West Vigo opponent in the 170-weight class during Thursday's match at McAnally Center.

The Greencastle wrestling squad found success in their its home match of the season, knocking off visiting West Vigo 45-32. 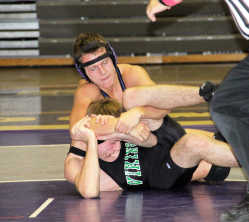 Greencastle's Hunter Smith gets a grip on his opponent in the 152-weight class. The Tiger Cubs won the match over the Vikings 45-32.

Riley Boswell started off the meet with a first round pin of Brady Likens in the 138 pound weight class. Hunter Smith picked up a decision win over Harold Cooper two matches later at 152 pounds.

Aaron Langdon and Carter Lewis posted back-to-back pins for the Tiger Cubs at 160 and 170 before the visitors grabbed two falls of their own at 182 and 195.

Ben Hesler then scored a fall at 220 pounds over Tyler Bell before Greencastle received two forfeits at heavyweight and the 106 pound classes.

West Vigo made the meet interesting with three straight wins, but Nick Pingleton secured the win with a first round pin of Anthony McGill to ensure the Tiger Cubs started off the season 3-1.

"I think we've improved since the first meet. Obviously there's still a lot of things that we need to work on," McComish said.

"But that's something we want to keep doing as the season moves on, which is to keep improving, breaking down the film and see where we need to go from there.

"Riley Boswell got a good win tonight, one that he had to work hard for. Ben Hesler had a nice win; Carter Lewis had a nice win as well.

"I think we had a lot of guys step up tonight and get wins for us, because without a lot of those six point wins, it would have been real close," McComish added.

Greencastle will be in action again next week at North Vermillion. McComish said that the unfamiliarity would mean a need for simple adjustments in the coming days.

"We'll really be working on the basics, because we've never wrestled North Vermillion before or since I've been here. We don't know really what they work so we just have to go back to basics and be ready."

Next match -- Greencastle travels to North Vermillion next Wednesday at 6 p.m.