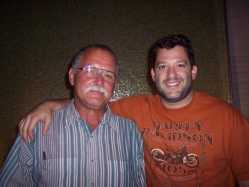 Piloting the private jet of a NASCAR Sprint Cup champion has certain advantages, such as hanging out in the Bahamas with the boss. As Tony Stewart's pilot, Bill LaFoe, left, of Greencastle, accompanies the champ to races around the country and to some slightly more exotic locations.

Shortly after Tony Stewart won the 2011 NASCAR Sprint Cup Championship on Sunday, Nov. 19, racing fans got a small example of the champ's generosity.

Stewart, who is also the co-owner of Stewart-Haas Racing, had promised to take the team's 160 employees to Las Vegas, the site of Friday's Sprint Cup awards banquet.

What was a footnote to a championship interview for most race fans is an everyday reality for one Greencastle man.

Bill LaFoe, along with Stephen Bradley of Clayton, pilots Stewart's private jet. The fact that Stewart's jet is now housed at the Putnam County Airport is just one example of Stewart's commitment to an employee.

"He's a good guy to work for," LaFoe said. "It kind of impressed me when they built that hangar at the airport because it worked better for me. It's a commitment to me and it makes our lives easier, going over and getting ready to go. It works out well."

LaFoe, who lives on Ballard Lane with his wife Karen, has a "commute" to the hangar that can be measured in feet, not miles.

As Stewart's pilot, though, LaFoe has some added perks the other Stewart-Haas employees may not have. If the driver wants to take a vacation, he needs someone to fly him to his destination.

"We've been to St. Maarten. We've been to the Bahamas several times," LaFoe said. "My wife goes with us on the spring vacations -- usually NASCAR's first off-week."

He said Karen will also be accompanying him in January when he flies Stewart to Daytona for a testing session. But the inclusion of family is nothing new.

"Whenever I want, I can bring any of my family. My wife gets to come to two or three races a year. I've had all of my daughters to at least one race. That's a big upside to the job too," LaFoe said.

A lot of LaFoe's interaction with the three-time champion is when he's out of the spotlight, as the privacy of the plane is the only time away he gets.

"The airplane kind of turns into a station wagon sometimes," LaFoe said. "He lives on a limited schedule. He doesn't have a lot of free time to himself so he just uses the airplane."

Stewart also makes sure that LaFoe gets free time whenever it's available. If a race is relatively close to Indiana, LaFoe can simply drop Stewart off at his destination and fly back to Greencastle.

"When it's close to home, we'll drop him off and come home. If it's an hour or more (flight) I'll usually stay," LaFoe said.

Of course there are times when Stewart's interests outside of NASCAR mean LaFoe has to stick around to take him somewhere else. The driver's love of dirt track racing gets the better of him, and a weekend on the asphalt may be interrupted by some dirt track action.

"There are times that we could go home, but we stick around because he wants to go race dirt," LaFoe said. "He's not given up the attitude that asphalt's how you get to the dirt track to go racing."

Stewart's commitment to his pilot is repaid in LaFoe's loyalty. He is effusive in his praise of Stewart and proud of what he has accomplished as the first driver-owner in two decades to win NASCAR's biggest prize.

"A big thing is, it validated Stewart-Haas Racing. When it was just Haas Racing, they could barely finish on the lead laps and all of a sudden they're champions," LaFoe said. "I think this did a lot of good for a lot of people.

"It was a big step giving up something sure at Gibbs to come over to a race team that you weren't sure how it was going to do. But I think Tony knew. Tony's the businessman," he added.

As a person who can say he loves his job and loves his boss, LaFoe also knows there are some good local people who have made it easier to work for Stewart. The construction of Stewart's hangar earlier this year was due to the effort of a lot of people to whom he is thankful.