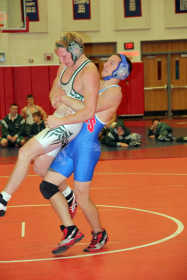 The South Putnam hosted North Putnam, Monrovia and Rockville in a rare Wednesday four-way match. The Eagles came way with a perfect 3-0 record, with Monrovia going 1-1 and North Putnam 0-2.

Eagles head coach Josh Hendrickson was pleased with is team's performance after the match.

"It's always nice to get three wins," he said. 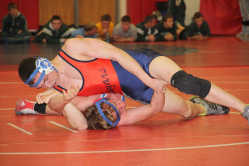 The Eagles looked strong on a night when they honored their two seniors Jesse Gardner and Andy Waters. The team is young, but they are getting the mat time that does nothing but make the team even better.

"We've been young for the past couple years. We're still young, but these guys have been with it for a while now and they're starting to get some experience which helps. We're just trying to get better every meet," Hendrickson said. 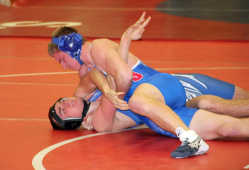 Next the county schools took to the mat to battle each other, with South Putnam coming away with a 50-20 win.

After its first match of the evening, the Rockville Rox had to call it a night having reach its dual match quota for the season. The final match of the night was between South Putnam and Monrovia, with the Eagles picking up a 48-30 win after sweeping the final three matches to account for the margin of victory.

Harris picked up this third forfeit of the night to start the match for the Eagles. Williams followed with a pin, with Hacker receiving a forfeit. South Putnam next win came at 132 when Franklin pinned Lane Cooper. Joe Waters followed that up with his own pin at 138.

Monrovia's Kevin Giza's won at 152 adn tied the match at 30-all. After having strolled to the mat to have his hand raised on two forfeits, Gardner would set up the win for the Eagles. Gardner won by pin in the third period to give the Eagles the lead for good at 36-30.

Andy Waters extended that lead after recording his second pin of the night. Thompson closed the night out with a pin over Monrovia's Nick Fairfield to give South Putnam the 48-30 victory.

Gardner and Waters were 5-1 on the night and Hendrickson acknowledged the impact they had on the night.

"Yes they did. Andy and Jesse both stepped up. That match against Monrovia came down to the last three matches and they came up with some big wins for us there," Hendrickson said.

North Putnam head coach Benny Ault thought his team did a good job and will only improve as the year goes on.

"The boys wrestled well. We just need to get a little bit better and get a couple weight classes filled and we'll be OK," Ault said.

Thompson, Harris, Williams, Hacker, Franklin and Gardner posted perfect 3-0 records on the night, while Kleiber and Sexton were 2-0 and Cox was 1-0 on the night for the Cougars.

As Hendrickson said, it's always nice to pick up three wins in a night's work and discussed how he felt pretty comfortable coming into Wednesday match.

"It's a Wednesday meet, so it's kind of unique," he said. "There's not many Wednesdays you're facing three teams other than the county tournament. I knew it would be difficult and a long night, but I knew we had a good chance coming in. We've already seen Monrovia and North Putnam, so we kind of knew what we were getting there.

"Rockville brought some pretty good kids. They didn't have a lot of kids, but they had really good kids. I still thought we wrestled them pretty well. That was some good mat time for us tonight," he added.