It's a wonderful life for local chiropractor 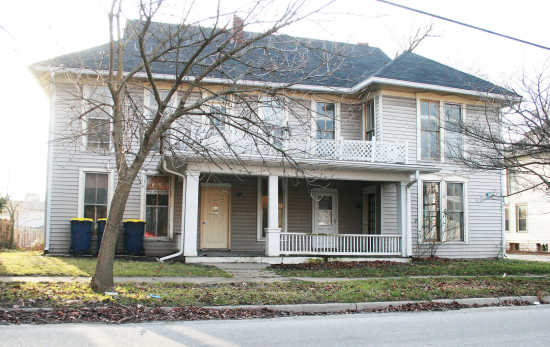 The property at 112 Bloomington St., once a single-family home and most recently apartment units, will become both the office and residence of local chiropractor Dr. Amie Bailey following Zoning Board action this week.

Clearly, George Bailey of "It's a Wonderful Life" movie fame has nothing on Amie Bailey, Greencastle chiropractor.

While good, old George Bailey had on-screen help from a guardian angel in seeing how life in Bedford Falls might have been without him, Amie Bailey learned firsthand how much she is appreciated Wednesday night during the December meeting of the Greencastle Board of Zoning Appeals.

After all, Dr. Bailey didn't just get the approval of the BZA to relocate her Covered Bridge Chiropractic office to 112 Bloomington St., she got a hearty endorsement from the neighborhood, and even a plug for her chiropractic expertise.

Not too bad when you realize the last time someone wanted to put a chiropractic office in an otherwise residential area (the church property at Arlington and Washington streets), it was met with much verbal resistance and ultimately was turned down by the BZA.

Wednesday night that certainly was far from the case as Dr. Bailey asked for a special exception to operate her chiropractic business as a Type II home occupation in an area zoned TN (Traditional Neighborhood).

In accordance with the regulations for a home occupation special exception, Dr. Bailey will live in the former apartment building and utilize no more than 25 percent of its facility for her office.

She also is limited to one employee who does not reside on the premises. The office will be open four days a week with two patients per hour, six hours a day expected. Parking on site is more than adequate for the home office designation.

"Impact is expected to be unnoticeable," Dr. Bailey said, noting that the building is already on a busy highway, and the presence of parked cars should be less than when the building was being fully used as apartments.

Dr. Bailey received unanimous approval for the special exception following a motion by John Phillips and a second from Paul Sanders.

BZA Chairman Jeff Sigworth, who made the final vote 3-0 (members Kathy Ferrand and Donnie Watson were absent), stressed that the ruling does not constitute any kind of precedent since all special-exception requests are considered on a case-by-case basis.

Bailey, who already owns the 112 Bloomington site, is relocating her office from 1209 Bloomington St. (behind the Citgo station) and is moving her residence from the house next door at 108 Bloomington St., where she has lived the past eight years.

Moving to 112 Bloomington, she said, will allow her to minimize office overhead while maximizing flexibility for herself and her children.

The neighbors apparently couldn't be happier either.

Jinsie Bingham, who has lived at 104 Bloomington St. for 70 years this month, called it "a big win for Bloomington Street" in a letter to the BZA. "I endorse the proposal as both a resident and the Third Ward city councilor," she added.

Bingham said the property was once "one of the nicest homes in the neighborhood," but over the course of its life as rental units, it has deteriorated until its recent tenure under an absentee owner turned it into the worst "residential eyesore on the west side of Bloomington Street all the way from Washington Street south to Veterans Highway."

Neighbor Kent Mecum, who resides at 114 Bloomington St., detailed horror stories associated with previous tenants. He said he has endured bonfires being started next to his garage and hot ashes being thrown under his pine trees, as well as tenants letting their hormones rage out of control on his adjoining property.

"Oh, I've had students doing naughty things in my backyard," Mecum said. "Do I need to say more?"

The emeritus DePauw University professor said the neighbors he has talked with "wholeheartedly support" Dr. Bailey's request. Those remarks were underscored by fellow retired professor and area resident Nashat Nasr. He also spoke briefly and even commended Bailey for her chiropractic skills as related by his wife.

But it was Mecum who summed up their feelings.

"With your office there," he said, pausing to catch the eye of the petitioner, "it will be wonderful."