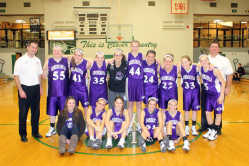 "I'm very proud of the team," GHS head coach Matt Welker said. "We had not faced these two team yet in the season. We played Cloverdale a couple of nights ago, so we hadn't faced North Putnam, (who we played) in the first game, so we had no idea what we were facing. They're a solid team, but we came out from the start pressing and tried to set the tone with the intensity.

"We have a lot of depth on our team, so we try to use that to our advantage. We got out big on them early and were able to hold the lead," he added.

During the first quarter, it looked like South Putnam was going to give the Tiger Cubs all they wanted and then some. The Eagles put up eight points, with Olivia Arnold connecting on two from behind the arc and Amanda Barnes adding two free throws.

On the flip side, the Tiger Cubs were able to post 12 points, with Stuckwisch, Taylor Stoltey and Melody White scoring four points each. Greencastle was able to continue its balanced scoring in the second quarter, while South Putnam's shooting was as cold as ice.

Stuckwisch once again led the team with six points in the quarter, with Tera Amis coming off the bench to score five points. The Tiger Cubs defense was a big factor, allowing the Eagles zero field goals in the quarter and helping GHS take a 25-8 lead into the break.

The Tiger Cubs defense continued to rise to the occasion in the third, limiting South Putnam to just two points, while the GHS offense scored 12 to take a 37-10 lead entering the fourth quarter.

South Putnam was able to keep pace with the Tiger Cubs in the final quarter as they scored five points to Greencastle's six. Barnes accounting for all of South Putnam's scoring in the final stanza. Greencastle had Rebecca Sampson, No. 23 and Madison Trout record two points each as they went on to win the contest 43-15.

South Putnam was led by Barnes with nine, while Arnold chipped in six points.

"I'm really proud of all the players. We have a great coaching staff. A great group of girls. They work hard, they're dedicated, listen to what we say and they're really improving as basketball player, so I think the future looks bright for Greencastle girls basketball," Welker said.