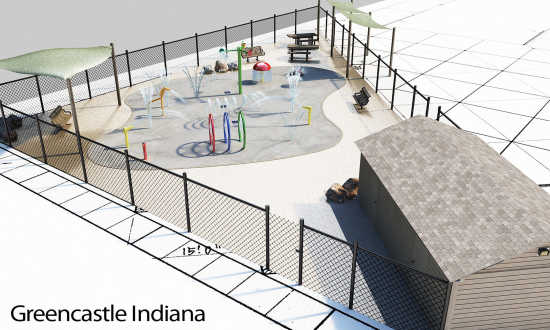 Architect's rendering shows one option for fitting the proposed splash park into the northwest corner of the Greencastle Aquatic Center site, utilizing the old baby pool location and retaining the mushroom waterfall attraction as part of the layout.

When the women of the Greencastle Civic League envision a project, they don't push the envelope, they rip it to shreds.

When they took up the cause for the Emerald Palace playground in 2001, all they needed was an army of volunteers and $125,000 in monetary and in-kind donations.

Yet despite a cold, rainy week and a dubious economic climate, they got what they needed in manpower and moolah, and the playground became a reality and a big favorite at Robe-Ann Park.

Ten years later the Civic League ladies have another signature project on the drawing board for Robe-Ann Park -- a spray/splash park to be known as the "Splash Pad."

After working with the Greencastle Park Board for several months on locations and possible designs, the splash park is now scheduled to go inside the Aquatic Center fence in the area of the old baby pool.

And just how ambitious is this effort?

Nearly twice as expensive as the Emerald Palace project -- with a nearly quarter-million-dollar draft budget of $245,000 and a proposed summer 2013 opening.

That's according to the draft presented to the Park Board at its December meeting by Civic League President Emily Knuth.

The Civic League plans to raise the money needed to finance the project through grants, donations from local businesses and organizations and contributions from community members, along with fundraising events to be announced.

"In addition," Knuth said, "it is our intention to raise a minimum of $12,000 to start a maintenance and operation fund for the Splash Pad at the Putnam County Community Foundation."

The plan is to begin applying for grants in 2012. Among the possibilities are "significant" grants from sources like Pepsi, Walmart, McDonald's, Subaru and the Putnam County Community Foundation to name a few. Once enough grant dollars are in place, Knuth said the Civic League will turn to local fundraising efforts.

The Civic League recently received bids from four general contractors, and has decided to move forward with Spear Corp. of Bainbridge.

"Our vision is pretty simple," Knuth said. "We want to raise enough money to construct and maintain the Splash Pad so that it is free to the public."

A splash park typically offers water, sprayed, gushed, dumped and poured for enjoyment, like days of running through the sprinkler at home. It will have no standing water, thus avoiding the need for any lifeguards.

The ultimate design will include input from children within the community, the Civic League has said, just as the creation of the Emerald Palace did.

"We decided that if we were going to do this," Knuth said, "we wanted to do something people would be excited to go to."

While the proposed placement of the Splash Pad will mean the loss of the baby pool, that section was closed all last year after it was deemed non-compliant with state pool codes.

The splash park layout will also have a small building to house the necessary pumps and filters but also will include a family restroom for changing, Knuth noted.

The Park Board will also explore the possibility of opening the splash park prior to the regular pool season beginning and then continuing its use after the end of the swimming season (possibly May 1-Sept. 30).

Opening and closing hours earlier than the daily pool operations are also possible for the Splash Pad.

"All the logistics will have to be worked out," Park Director Rod Weinschenk said. "It'll be a great addition."

He also said it was a "perfect" solution for the baby pool section.

The newest board member, Beva Miller, said she was excited about the prospect.

"I think this is wonderful," she said. "I really like that it will have shade, too, so people can get their kids out of the sun."