Born Nov. 14, 1919 in Laurel County, London, Ky., she was the oldest of six children and the daughter of Denver Lee and Emma Victoria (Swanner) Creech. 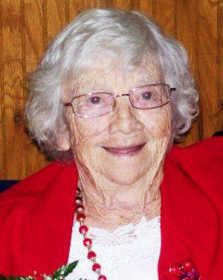 Daisy retired from DePauw University. She had previously been a truck driver with her husband in Fountain and Putnam counties.

She was a member of the Holiness Church of Lilly, Ky.

She was preceded in death by her parents, husband, sisters and their husbands, Ada (Creech) Bryant (Kenneth), Goldie (Creech) Marshall (Manual), Jenny Lou (Creech) Reid and several nieces and nephews.

Services will be held at Porter Funeral Home at 10:30 a.m. Friday, Dec. 16 with John Gossett officiating.

Interment will follow in the Fairview Cemetery, North Salem.

Online condolences may be made at www.porterfuneralhome.us