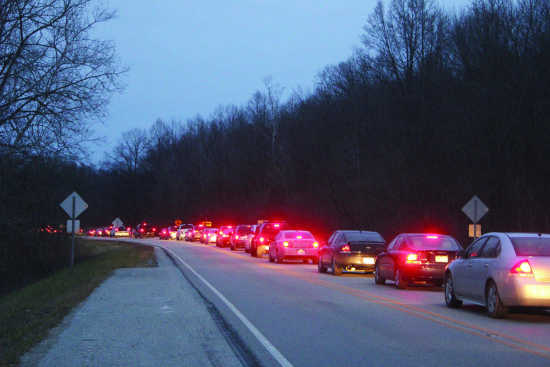 While a hazardous materials spill Monday afternoon left Interstate 70 closed between Cloverdale and Brazil for several hours, some motorists were caught in the middle in the crash's immediate aftermath. This line of motorists wound its way north on State Road 243 from I-70 toward Putnamville early in the evening. Traffic was diverted north at both exits to U.S. 40, but drivers closest to the accident were stuck on the interstate for more than six hours.

PUTNAMVILLE -- A one-vehicle accident Monday afternoon claimed the life of a tanker truck driver and created a hazardous materials spill on Interstate 70 near the Putnam-Clay county line.

However, further tragedy was averted in an incident that could easily have turned out much worse.

A tanker truck, reportedly carrying the industrial solvent acetone, left the roadway for an unknown reason, striking a cement bridge support about 4:15 p.m. near County Road 775 West, just east of the 30-mile marker in the westbound lanes of I-70.

No other vehicles were involved.

Upon impact, the tanker trailer overturned and broke nearly in half, releasing approximately 6,000 gallons of highly flammable hazardous industrial solvent.

The vehicle, owned by Quality Carrier out of Florida, ended up in the median of the interstate, spilling a greenish liquid that first-responders indicated "smelled like ether."

With the chemical considered extremely flammable, fire and police personnel were urged to use extreme caution around the accident scene. They were even advised at one point that, "that stuff will go up in a heartbeat."

Authorities responding to the scene initially indicated the entrapment of the truck driver and summoned LifeLine emergency helicopter for the possible transport of the victim.

However, just before 5 p.m., LifeLine was disregarded en route as it became obvious the incident was a fatality.

At presstime, the identity of the male victim had not been released.

An autopsy was scheduled for 10 a.m. Tuesday at Terre Haute Regional Hospital and will be performed by pathologist Dr. Roland Kohr.

Authorities were still on the scene late into the night, describing the clean-up effort as necessitating "endless hours."

Watts said hazardous material crews from Indianapolis and New Albany were summoned to the scene for clean-up assistance.

At one point about 9:30 p.m. Monday, officials reported that water in the median more than 150 yards west of the accident scene was "hot," apparently contaminated by the acetone spill.

The volatile chemical was also said to be present in a ditch along the south side of the I-70.

Fire officials on the scene created a berm to keep the liquid from getting to the nearby Croy's Creek (which feeds into the Eel River).

A couple of vehicles that had attempted to cut through the median became stuck in the grass near the scene. Those vehicles had to be evacuated and abandoned as fears that a simple spark during a towing effort might ignite the spilled chemical.

The crash is being investigated by ISP Trooper Marcus Tow.