She was born on March 30, 1931 in Morehead, Ky., to Ora Russell Gilkison and Lucy Sloan Gilkison.

A graduate of Rowan County Kentucky High School, she married Grover C. Fox on June 16, 1949 in southern Indiana, and they farmed in Holton, Ind. 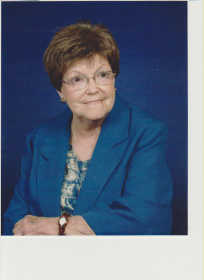 Hound and Grover moved to Kentucky where they owned and operated Fox's General Store in Morehead. They moved back to Indiana, living in Greenwood first, before settling in Putnam County in 1973.

Mrs. Fox was a member of Big Walnut Baptist Church in Reelsville, and currently was attending Life Builder Community Church in Greencastle.

She was preceded in death by her parents; an infant brother, Thurman; her husband, Grover C. Fox; and her beloved miniature schnauzer, Matilda.

Also surviving several cousins, numerous friends; her beloved dog that she rescued in an ice storm, Furby; and a grandbaby dog, Chi Chi.

Hound was an avid collector of Boyd's Bears and enjoyed yard sales, thrift stores, jewelry and gardening. Her greatest joy was spending time with family and friends.

The family will receive friends on Thursday from 11 a.m. until time of services at the funeral home.